LeBron James became the first player in NBA history to score 30 points and shoot at least 60 percent in six straight games as the Miami Heat held off the Portland Trail Blazers 117-104 on Tuesday. 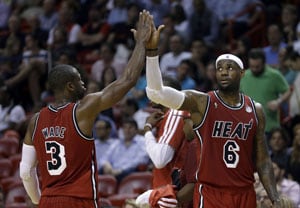 LeBron James became the first player in NBA history to score 30 points and shoot at least 60 percent in six straight games as the Miami Heat held off the Portland Trail Blazers 117-104 on Tuesday.

James scored 30 points on 11 for 15 shooting, Chris Bosh scored 32 points and grabbed 11 rebounds, and Dwyane Wade added 24 points for Miami, which wasted a pair of 14-point leads - then put the game away with a 14-0 run in the final minutes.

Damian Lillard had a game-high 33 points for Portland, which got 29 from LaMarcus Aldridge and 20 from Wesley Matthews.

It was the 1,000th regular-season win in Heat history.

Dwight Howard had 19 points and 18 rebounds for the Lakers and Antawn Jamison added 19 points as Los Angeles survived Kobe Bryant's bizarre four-point performance for a 91-85 victory over the Phoenix Suns and its eighth win in 11 games.

Bryant didn't attempt a shot in the first half and scored his first basket with 2:13 to play, finishing 1 for 8 with eight turnovers in one of the oddest games of his 17-year career.

Michael Beasley scored 18 points and Luis Scola had 15 for the Suns, who have lost eight of 10.

DeMar DeRozan scored 22 points, Gay had 17 and John Lucas scored 12 of his 14 points in the final quarter as the Raptors won their third straight.

Marc Gasol had 24 points and 12 rebounds for Memphis and Mike Conley scored 22 points as the Grizzlies beat the Sacramento Kings 108-101.

Tony Allen added a season-high 19 points to help the Grizzlies win their sixth straight over the Kings at home.

DeMarcus Cousins scored 23 points and Tyreke Evans had 20 for the Kings.

In other games, Al Jefferson scored 23 points and Paul Millsap had 18 as the Utah Jazz ended Oklahoma City's four-game winning streak with a 109-94 victory over the Oklahoma City Thunder, while James Harden overcame a sore knee to score 27 points and make seven rebounds in the Houston Rockets' 116-107 win over the Golden State Warriors.