The Los Angeles Lakers secured an NBA playoff spot even before taking to the court on Wednesday, then needed overtime of their own game to learn where they were seeded. 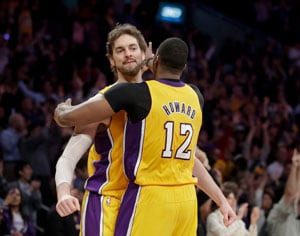 The Los Angeles Lakers secured an NBA playoff spot even before taking to the court on Wednesday, then needed overtime of their own game to learn where they were seeded.

The Los Angeles Clippers also had to wait until the final minutes of the NBA regular season to learn their fate, clinching home-court advantage for their first-round series against Memphis.

The Grizzlies guaranteed the Lakers' turbulent season would continue when they beat the Utah Jazz 86-70. The Lakers then moved up to the No. 7 seed by outlasting Houston 99-95 in overtime of their regular-season finale.

Without the injured Kobe Bryant, the Lakers will face the No. 2 San Antonio Spurs on Sunday.

The Grizzlies were hoping their victory would give them home-court advantage against the Clippers, but Los Angeles earned it by winning 112-108 at Sacramento in what could be the Kings' final game there.

The Clippers, who won their first Pacific Division title, earned the No. 4 seed and will host the Grizzlies on Saturday in a rematch of their seven-game victory in the first round last year.

Carmelo Anthony won his first scoring title when he and Kevin Durant both sat out their games. The New York Knicks beat the Atlanta Hawks 98-92 without Anthony, and the Chicago Bulls took the No. 5 seed in the Eastern Conference and the Hawks settled for No. 6.

The playoffs will open Saturday with New York hosting the Boston Celtics, and Chicago visiting the Nets in the first postseason game in Brooklyn. The defending champion and top-seeded Miami Heat will host the Milwaukee Bucks on Sunday, when the Hawks visit the Indiana Pacers.

Also in the West, the No. 3-seeded Denver Nuggets, a league-best 38-3 at home, hosts the No. 6-seeded Golden State Warriors on Saturday.

Anthony finished with 28.7 points per game in becoming the first Knicks player since Bernard King in 1984-85 to win the scoring title. The Knicks went 54-28, their best season since 1996-97.

"He's just been solid all the way across the board in everything he's done for this team and that's why we're in the position we're in today," Knicks coach Mike Woodson said.

Durant averaged 28.1 points, falling short in his bid to join Michael Jordan and Wilt Chamberlain as the only players to win four straight scoring titles.

Durant's Oklahoma City Thunder are the No. 1 seed in the West and will play the Houston Rockets and James Harden, whom the Thunder traded in the preseason.

"I certainly know going into this last stretch of the season, we had a lot of tough games on the road, a lot of good playoff teams," Thunder coach Scott Brooks. "We had a stretch there, it seems like every night was a game of a lot of implications on playoff positioning.

"I like how we're playing. You always want to play good basketball down the stretch. It doesn't mean you're going to have guaranteed success in the playoffs, but we know what we have to do and we're looking forward to the challenge ahead of us."

The Warriors, back in the playoffs for the first time since 2007, clinched the No. 6 spot by beating the Portland Trailblazers 99-88 as Stephen Curry set a NBA single-season record with 272 3-pointers.