Kris Humphries has officially caught up with Kim Kardashian. The basketball pro and the reality star are husband and wife. 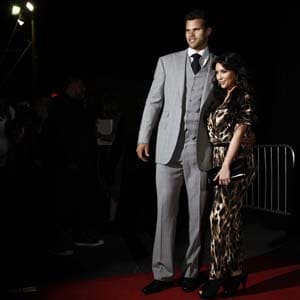 Kris Humphries has officially caught up with Kim Kardashian. The basketball pro and the reality star are husband and wife.

The ceremony will be televised as a two-part special on E! in October.

It is the first marriage for Humphries, who last played for the NBA's New Jersey Nets, and the second for Kardashian, star of E!'s "Keeping Up with the Kardashians." She was married to music producer Damon Thomas from 2000 to 2004.

Kardashian's gown had a tulle skirt, basque waist and Chantilly lace, and was matched with a pair of Giuseppe Zanotti shoes, the media outlets reported. The bride planned to wear two other Wang dresses before the night and the party were over.

Her sisters and TV co-stars Kourtney Kardashian, 32, and Khloe Kardashian, 27, served as co-maids of honor.

The groom wore a white peak lapel tuxedo jacket, black tuxedo pants and, a white shirt and a white bow tie, all designed by Ermenegildo Zegna.

Kardashian and Humphries began dating late last year and announced their engagement in May. He proposed on bended knee with a 20.5-carat ring by spelling out "Will you marry me?" in rose petals.

Since the couple's engagement, the pending nuptials have provided constant fodder for the media and the Kardashians, who posted updates about the wedding on their blogs and websites.

The wave of hype that preceded the ceremony didn't seem to faze the bride. Earlier this week, Kardashian said she was "totally calm" about the much-hyped ceremony.

"I think that freak-out moment kind of already passed," she said at a party on Wednesday to launch her new clothing line at Sears.

Comments
Topics mentioned in this article
NBA Formula 1 Kris Humphries
Get the latest Cricket news, check out the India cricket schedule, Cricket live score . Like us on Facebook or follow us on Twitter for more sports updates. You can also download the NDTV Cricket app for Android or iOS.