LeBron James had 40 points and 16 assists, and Dwyane Wade scored 39 as the Miami Heat pushed their winning streak to 12 games by outlasting the Sacramento Kings 141-129 in double overtime on Tuesday. 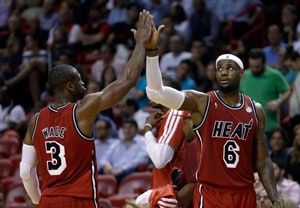 LeBron James had 40 points and 16 assists, and Dwyane Wade scored 39 as the Miami Heat pushed their winning streak to 12 games by outlasting the Sacramento Kings 141-129 in double overtime on Tuesday.

Ray Allen added 21, Chris Bosh finished with 15 and Chris Andersen had 10 for the Heat, who remained six games clear of second-place Indiana in the Eastern Conference standings.

Miami's 12-game winning streak is the longest in the NBA and matches the second-longest in club history.

Marcus Thornton scored 36 points for Sacramento, the most by any reserve in the NBA this season.

At Indianapolis, David West had 28 points and seven rebounds as the Indiana Pacers overcame the ejection of Roy Hibbert following a fourth-quarter scuffle to beat the Golden State Warriors 109-97. West also was called for a technical foul, along with the Warriors' David Lee, Stephen Curry and Klay Thompson, for the altercation that began with 6:10 remaining in the game.

George Hill had 23 points and seven assists, and Paul George had 21 points and 11 rebounds for the Pacers, who have won five straight.

Curry scored a season-high 38 points and Thompson had 13 for the Warriors.

Keith Bogans added 12 points for Brooklyn, hitting all four of his shots, including three 3-pointers in the fourth quarter, when New Orleans nearly erased a deficit that had been as large as 22 points in the second quarter.

Greivis Vasquez scored 20 and Robin Lopez 14 for New Orleans, which has lost four of five.

Dion Waiters scored 25 points for Cleveland as the Cavaliers broke an 11-game losing streak against the Chicago Bulls with a 101-98 victory, and the Milwaukee Bucks downed the Dallas Mavericks 95-90, despite Dirk Nowitzki making 20 points and 20 rebounds for the first time in 10 years.

In other games, the Los Angeles Clippers defeated the Carolina Bobcats 106-84, the Orlando Magic beat the Philadelphia 76ers 98-84 and the Phoenix Suns were 94-83 overtime winners over the Minnesota Timberwolves.

Comments
Topics mentioned in this article
Sacramento Kings NBA
Get the latest Cricket news, check out the India cricket schedule, Cricket live score . Like us on Facebook or follow us on Twitter for more sports updates. You can also download the NDTV Cricket app for Android or iOS.