Kobe Bryant scored 34 points and Andrew Bynum added 26 points and 10 rebounds to lift the reeling Los Angeles Lakers to a 105-102 victory over the Minnesota Timberwolves on Friday. 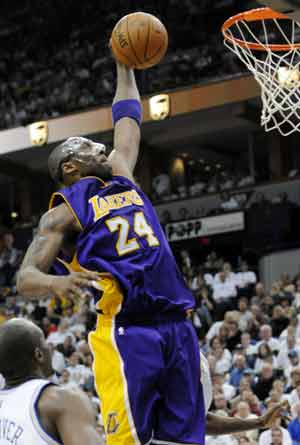 Kobe Bryant scored 34 points and Andrew Bynum added 26 points and 10 rebounds to lift the reeling Los Angeles Lakers to a 105-102 victory over the Minnesota Timberwolves on Friday.

Bynum dominated the smaller Wolves down low and Bryant made four free throws in the final 16 seconds for the Lakers, who beat the Timberwolves for the 18th straight time.

Derrick Williams had 22 points and 10 rebounds and Nikola Pekovic had 25 points and 13 boards for the Wolves, who found out less than 30 minutes before the game that leading scorer and rebounder Kevin Love could not play because of back spasms.

The Wolves had a chance to win it down one with 16 seconds to go, but Williams' drive to the basket was blocked by Pau Gasol. Williams wanted a foul but didn't get the call.

At 33 years old and in his 16th season, Bryant doesn't dunk as often as he used to. But he broke out a couple in the second half to energize the Lakers. The first came on a fastbreak in the third quarter that got them rolling. Then he blew by Luke Ridnour for another with 3:06 to play that put them up 97-95 and set up a heart-pounding finish.

Bynum converted an alley-oop to make it 99-95, but the Wolves came right back with a layup from Pekovic and a 3 from Luke Ridnour that gave them a 100-99 lead with 1:33 to play.

Bynum was credited with a bucket on a goaltend from Williams with 34 seconds to go.

Pekovic tipped home a missed layup from Williams and Bryant scored two free throws for a one-point lead with 16.4 seconds to go.

Williams crashed to the lane and appeared to draw some contact from Gasol, but Bryant corralled the rebound to save the Lakers.

Ricky Rubio had 15 points, 10 assists and four rebounds, but had to be carried off the court in the final 16 seconds after his left knee buckled.

Michael Beasley scored 15 points for the Wolves and Gasol finished with 12 points and 11 boards.

The Lakers limped into Target Center on Fridaywith a 6-14 record on the road, including ghastly losses at Washington and Detroit earlier this week. They gave away a 21-point lead against the Wizards on Wednesday night, with Bryant missing more shots than Bynum and Gasol attempted in the game combined.

They were just as sluggish early against the Timberwolves, falling behind by 14 points in the first quarter before Bryant got it going in the third. He scored 14 points in the period, hitting two 3s, throwing down a dunk and then finishing with two free throws to tie the score at 78 going into the fourth.

There was a ton of juice in the building before the game, with the team draping white t-shirts over every seat for a "whiteout" event. But all that buzz turned into nervous energy when Love didn't accompany the team to the court for pregame warmups. Even once the game got going and the Wolves stormed out of the gates, it seemed like the crowd had one eye on the action and one on the tunnel hoping the All-Star would come running out to get in the game.

Love never did make it out of the locker room, but Williams sure put on quite an impersonation.

The No. 2 overall pick took it strong to the rim and asserting himself on the glass. Williams scored 12 points and grabbed six rebounds in the first quarter to instill some more confidence and calm in a young team that was without its leader.

Comments
Topics mentioned in this article
NBA Minnesota Timberwolves MS Dhoni Kobe Bryant Rafael Nadal Tiger Woods
Get the latest Cricket news, check out the India cricket schedule, Cricket live score . Like us on Facebook or follow us on Twitter for more sports updates. You can also download the NDTV Cricket app for Android or iOS.