Pardeep Narwal continued with his stellar form as he guided Patna Pirates to a comfortable 46-30 win over Telugu Titans in a Pro Kabaddi League match on Friday. 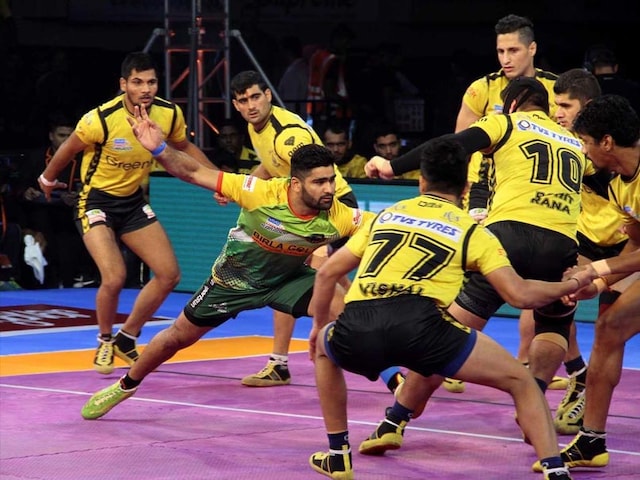 Pardeep Narwal continued with his stellar form as he guided Patna Pirates to a comfortable 46-30 win over Telugu Titans in a Pro Kabaddi League match on Friday. Narwal scored 14 points to lead his team to victory. He got able support from Monu Goyat who ended up with 10 points. It was Telugu Titans' 11th defeat of the season as their dismal run in the tournament continued. Patna Pirates are now second in Zone B with 41 points from 12 matches. Telugu Titans are fourth in Zone B with 30 points from 16 games. Narwal's first raid of the match was a super raid as Patna Pirates led 3-0 in the first minute. Rahul Chaudhari scored with his first raid as Telugu Titans trailed 2-4 after two minutes.

Patna Pirates wasted little time to inflict an all-out as they led 10-2 after four minutes.

Nilesh Salunke and Rahul Chaudhari got raid points for Titans as they trailed 7-11 in the seventh minute. Telugu Titans came back strongly as they inflicted an all-out in the 11th minute to lead 12-11.

Both teams exchanged raid and tackle points in the next few minutes as it was 14-14 in the 13th minute. Narwal made a successful raid in the 17th minute as Patna Pirates inflicted another all out to lead 21-16.

Patna Pirates recovered from Titans' onslaught as they led 23-16 at the end of the first half.

In the first five minutes of the second half, both teams scored two points each as Patna Pirates led 25-18. Monu Goyat scored two raid points in quick succession to give Patna Pirates 27-18 lead.

Patna Pirates led 29-29 with 10 minutes left on the clock and looked on course to a comfortable win.

Narwal attained his ninth super 10 of the season as Patna Pirates inflicted an all out to lead 33-20 in the 31st minute. Rahul Chaudhari scored a raid point in the 35th minute as Telugu Titans trailed 25-36.

Patna Pirates inflicted another all out in the 39th minute to lead 44-27. Telugu Titans scored a tackle point in the last minute as they crashed to a 30-46 defeat.

In the other match, Gujarat Fortunegiants beat U Mumba 39-28.