ISL: Mumbai City continued with their fine form, with Adam Le Fondre scoring his sixth goal in the victory against Kerala Blasters. 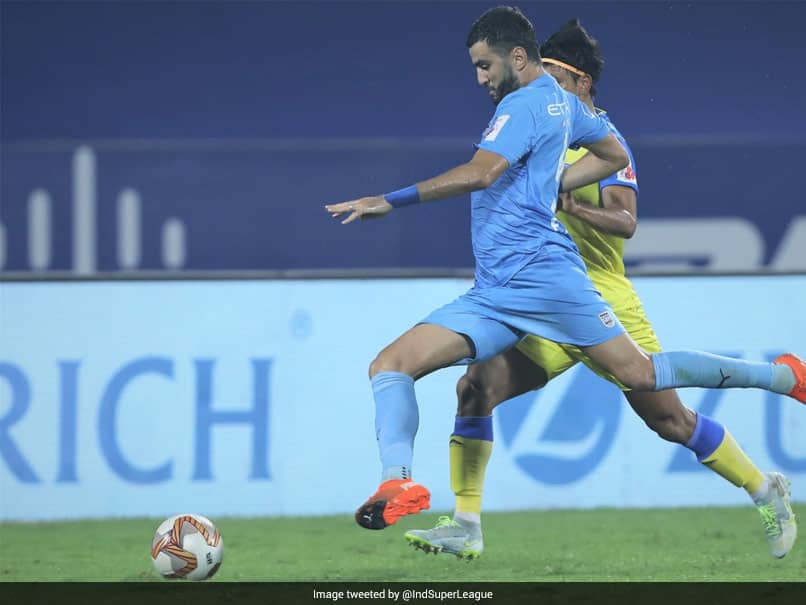 Mumbai City FC reclaimed the top spot in the Indian Super League (ISL) following a 2-0 win over Kerala Blasters FC at the GMC Stadium on Saturday. First-half goals from Adam Le Fondre (3') and Hugo Boumous (11') ensured full points for the Islanders who are now unbeaten in their last seven games. Both teams made a couple of changes to their line-ups, Boumous and Mandar Rao Dessai returned to Sergio Lobera's starting XI while for Kerala, Costa Nhamoinesu and Lalthathanga Khawlhring were named ahead of Abdul Hakku and Rahul KP.

Mumbai punished Kerala for an early error which gifted them the first goal in the third minute. Boumous latched on to a Vicente Gomez back-pass and the Frenchman was brought down in the box by Nhamoinesu and won a penalty. Le Fondre netted his sixth goal of the campaign despite Albino Gomes getting a leg to the ball.

Mumbai doubled their lead in the 11th minute and this time, Boumous got his name on the scoresheet. Ahmed Jahouh sprayed a long ball from his own half towards Boumous from a free-kick, and the Frenchman made it look easy as he got past his marker and slotted past Albino.

Kerala took time to get into the game and had a couple of tries at the rival goal forcing Amrinder Singh into action. Amrinder first denied Gomez with a diving save and later stopped Sahal Abdul Samad's effort. Sahal should have passed the ball to Facundo Pereyra, who was in a better position to score.

Kerala created chances and showed their desire to get back in the game but the Mumbai defenders were an equal match to their opponents. Mumbai were guilty of squandering yet another chance just before the break. Boumous cut the ball back to Le Fondre, but his chip sailed over the bar.

Kerala put up an improved performance in the second half. They created chances early and nearly pulled a goal back in the 55th minute but Jordan Murray's effort was ruled offside.

With less than 20 minutes on the clock, Mumbai had the chance to further extend their lead when they were awarded yet another penalty after Boumous was fouled in the box. But this time, Albino read it right and his strong right arm denied Boumous.

At the other end, Amrinder came up with a brilliant save when he parried Gomez's long-range shot which brushed off the crossbar. The keeper did exceptionally well to help his side maintain their fifth clean sheet of the season.

Kerala Blasters FC Indian Super League Football
Get the latest updates on India vs England Series, India vs England , live score and IPL 2021 Auction . Like us on Facebook or follow us on Twitter for more sports updates. You can also download the NDTV Cricket app for Android or iOS.