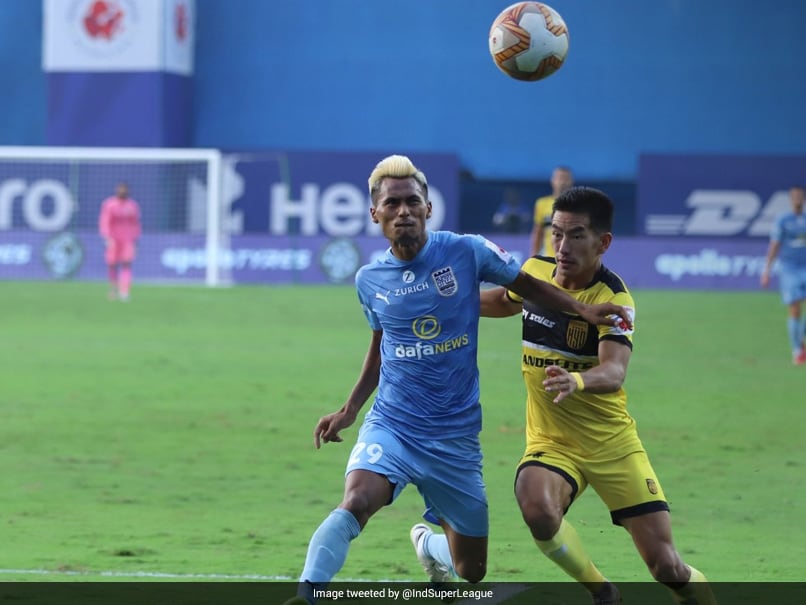 Vignesh Dakshinamurthy pulled off a stunning goal to set up Mumbai City FC's 2-0 win over Hyderabad FC in an Indian Super League match, on Sunday. In a match where both sides struggled to create clear-cut chances, Vignesh's acrobatic 38th-minute strike stood out as a genuine quality moment. Adam Le Fondre put Sergio Lobera's men further ahead in the 59th minute as Hyderabad tasted their first defeat of the season. The caginess that marked much of the game was evident from the fact that Vignesh's goal was the only shot on target in the first half. With Hugo Boumous missing yet again, Mumbai City's creative struggles that plagued them in their last match against Jamshedpur, continued on Sunday as well.

They had the better of Hyderabad in all departments of the game in the first half -- dominated possession, peppered the opposition box with crosses and completed a many more passes. But for the longest time, it looked like a goal would not come.

Whatever questions Mumbai City posed, the Hyderabad defence had the answer. Vignesh's cross in the very first minute of the game was duly dealt with. At the other end of the pitch, Aridane Santana created an opening for Mohammed Yasir, but his cut-back was intercepted by the Mumbai defence.

For Mumbai City, Bipin Singh was a lively figure in attack. The winger, in the 15th minute, whipped in a cross that was headed back into danger by Rowllin Borges at the far post, only for the Goan to be flagged offside. Bipin was again in the thick of things in the 26th minute, when he unleashed an attempt from down the right, after being fed by Ahmed Jahouh, only to find the side netting. But just when it looked like a goal was unlikely, it came in the most spectacular of fashions.

A free-kick from Jahouh was met with the deftest of touches by Bipin, that diverted it into the path of the onrushing Vignesh. The youngster volleyed it into the net for one of the best goals of the season so far. Immediately after the goal, Hyderabad had a chance to equalise when Akash Mishra's cross found Yasir in the box. He had a free sight on goal, but somehow managed to divert his header off the target.

Mumbai did not wait long after the second half started to increase their lead. Le Fondre took a touch after receiving a pass from Borges and slotted it past Subrata Paul. Hyderabad looked livelier than they did in the first half, especially with the introduction of Liston Colaco, but their inability to create clear-cut chances meant that they failed to trouble the Mumbai defence.