Joao Victor's penalty strike in the second half helped Hyderabad FC hold ATK Mohun Bagan FC to a 1-1 draw in the ISL on Friday. 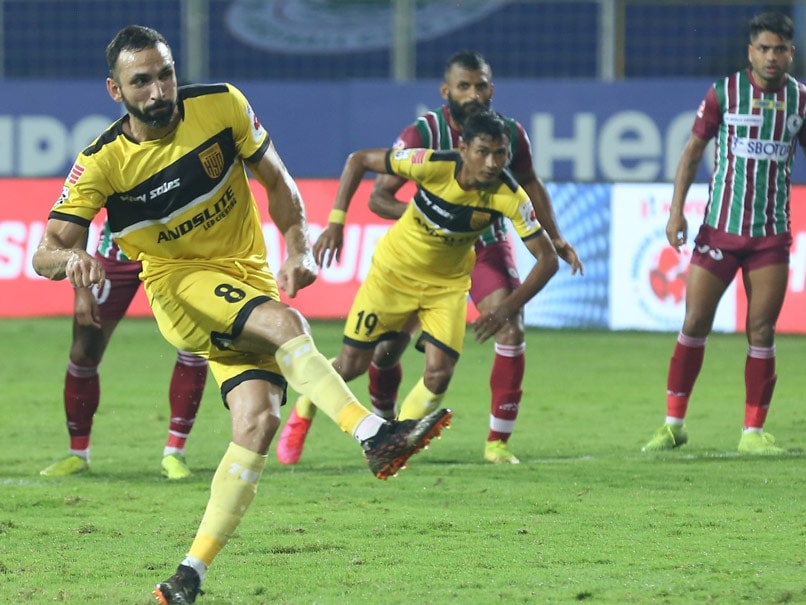 Hyderabad FC rode on Joao Victor's second half penalty to hold ATK Mohun Bagan to a 1-1 draw, maintaining their unbeaten run in the Indian Super League, in Margao on Friday. The duo of Roy Krishna and Manvir Singh looked threatening up front but missed a flurry of chances, while veteran Subrata Pal pulled off some fine saves under the Hyderabad post to keep a clean score-sheet in the first-half. Manvir finally broke the deadlock in the 54th minute capitalising on a defensive lapse by Odei Onaindia. But the Mariners' joy lasted just over 10 minutes as they conceded a soft penalty after Nikhil Poojary was brought down by Manvir with a faint touch.

The Brazilian midfielder pounced on the opportunity with a thunderous strike that kissed Arindam Bhattacharja's fingers before getting into the back of the net.

The result meant ATK Mohun Bagan failed to get a win from two matches to remain on second spot with 10 points from five matches.

ATKMB had lost to Jamshedpur FC in their last match.

Playing with just two foreigners in Onaindia and Victor, the 'Men in Yellow' put up a cohesive show to remain unbeaten with six points from four matches.

ATKMB had an early opportunity in the ninth minute when Roy Krishna came close to scoring after Pritam Kotal delivered an inch-perfect cross at the far post.

But Pal stood in their way thwarting Roy Krishna's powerful header. Roy Krishna was at it again in the 17th minute after a perfect run into the box but the Fijian's effort went wide at the far post.

Atletico de Kolkata Indian Super League Football
Get the latest updates on IPL Auction 2023 and check out  IPL 2023 and Live Cricket Score. Like us on Facebook or follow us on Twitter for more sports updates. You can also download the NDTV Cricket app for Android or iOS.