The result meant Robbie Fowler's SC East Bengal continued to be at the bottom of the ISL table after four games. 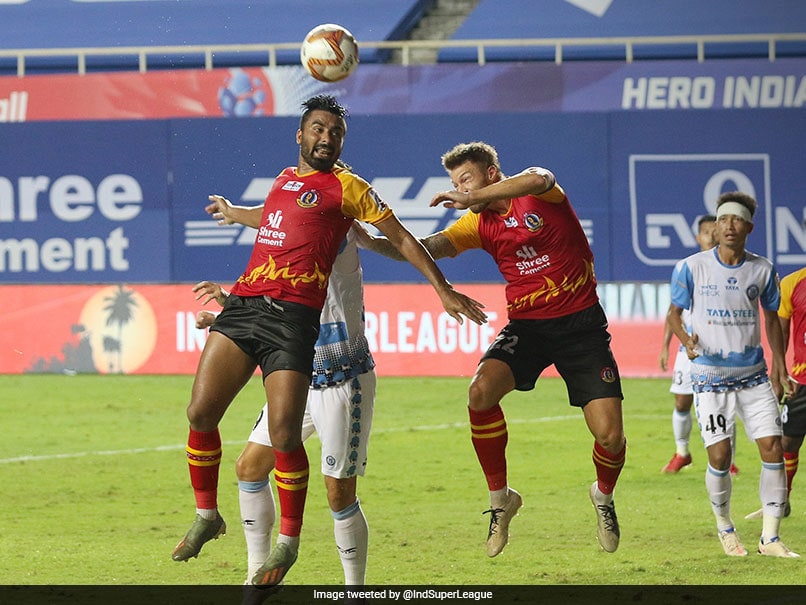 SC East Bengal earned their first point of the Indian Super League (ISL) Season 7, as they held Jamshedpur FC to a goalless draw at the Tilak Maidan Stadium on Thursday. The result meant Robbie Fowler's side continued to be bottom of the ISL table after four games. Fowler rang in four changes to his eleven that suffered a defeat against NorthEast United FC, while Jamshedpur FC made only one change as Aniket Jadhav was included in the line-up. Jamshedpur were superior and dominated possession against SCEB in the first half, but both sides headed into the break goalless after Coyle's side failed to convert their chances. The game was a cagey contest in the opening quarter but the momentum shifted in Jamshedpur's favour once East Bengal were reduced to 10 men in the 25th minute.

Jamshedpur fashioned an early opportunity to break the deadlock as early as the sixth minute. Peter Hartley threaded a ball for Jadhav in the box, but the forward blazed his shot over the bar.

East Bengal presented their opponents with a good fight as they tried to grab the lead, but the task got tougher when they were down to 10 men. Eugeneson Lyngdoh received his marching orders from the referee for a second yellow, following a rash tackle on Alexandre Lima.

Jamshedpur capitalised on the sending off and continued to pile pressure on Fowler's side but failed to convert their chances. Just before the half-hour mark, Valskis came close to breaking the deadlock. Laldinliana Renthlei whipped a cross from the right which was met by Valskis on the volley, but the ball narrowly missed the farpost by inches.

Nine minutes later, Stephen Eze had another golden opportunity to hand Jamshedpur the lead. The defender leapt high to meet Aitor Monroy's corner only to see his header, strike the underside of the crossbar before being cleared away.

Jamshedpur continued to dominate proceedings after the break, pinning East Bengal to their own half. They were nearly awarded for their persistence in the 69th minute only to be denied by the woodwork, again.

Both sides played cautiously in the dying minutes in hopes of not conceding a goal. There was drama late in the game as Renthlei was shown a second yellow card during stoppage time, leaving both sides with 10 men. In the end, both sides settled for a draw.

Jamshedpur FC Football
Get the latest updates on ICC T20 Worldcup 2022, check out the Schedule and Live Score. Like us on Facebook or follow us on Twitter for more sports updates. You can also download the NDTV Cricket app for Android or iOS.