Ravichandran Ashwin started the rot for Sri Lanka by taking two wickets in the very first over of the third Twenty20. Shikhar Dhawan hit a run-a-ball 46 not out as India chased down the paltry target of 83 with 37 balls to spare. Off-spinner Ravichandran Ashwin weaved his magic with a career-best four-wicket haul while Shikhar Dhawan hit an unbeaten 46 as India trounced Sri Lanka by nine wickets in the deciding third and final Twenty20 International to clinch the three-match series 2-1 on Sunday. (Highlights)

Ashwin scalped two wickets in the very first over and added two more to finish with dream figures of 4-1-8-4 as the hosts bowled out Sri Lanka for 82, their lowest ever score in T20 cricket.

Before this, Sri Lanka's lowest total was 87 against Australia in 2010 at Bridgetown.

Ashwin was simply unplayable on a pitch, which offered help to the spinners and took four wickets in his magical three-over opening spell.

Besides Ashwin, Suresh Raina also shone with the ball - scalping two wickets for just six runs in his two overs.

The series win also helped India retain its No. 1 position in the ICC T20 rankings.

Such was the plight of the visitors that only two batsmen - Dasun Shanaka (19) and Thisara Perera (2) -- managed to reach the double-digit mark at ACA-VDCA stadium.

The total was too small for India, who overhauled the target in 13.5 overs after losing Rohit Sharma (13) early in the innings. The Indians were in no hurry as they waited for bad balls to hit boundaries and relied on singles and twos to keep the scoreboard ticking.

Opener Shikhar Dhawan (46 off 46) and Ajinkya Rahane (22 off 24) took the side over the finishing line with an unbeaten 55-run partnership for the second wicket.

There were not many boundaries but Dhawan finished off the match with a six and a four off debutant Asela Gunaratne.

It was the second successive series win for India after whitewashing Australia 3-0 in their own backyard. India's next assignment is Asia Cup in Bangladesh where they play the hosts on February 24 in the tournament-opener in Mirpur. 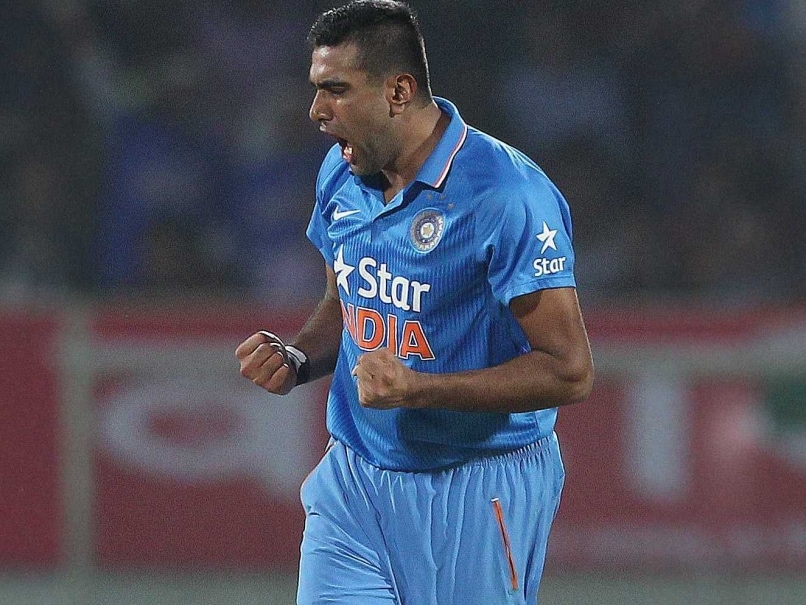 Ravichandran Ashwin's figures of four for eight in the third T20 against Sri Lanka are the best by an Indian in this format.

Earlier, opting to field, India skipper Mahendra Singh Dhoni handed the new ball to Ashwin and he responded with two wickets in the first over of the match.

Ashwin had Niroshan Dickwella (1) stumped when the batsman charged down the track and missed the ball completely.

In the last ball of the over, Ashwin trapped Tillakaratne Dilshan (1) and when he retuned for his second over, he had Dinesh Chandimal caught by Hardik Pandya as the rival skipper tried to cut loose but miscued a shot.

Sri Lankan innings was in complete disarray losing the first three wickets with only 12 runs on the board.

In his third over, Ashwin got rid of debutant Asela Gunaratne and soon the Lankans were reeling at 21 for five with left-arm paceman Ashish Nehra taking the fifth wicket.

Such was the dominance of the Indian bowlers that only six boundaries were hit in seven overs. It was only in the eighth over that Sri Lanka found two sixes through Dasun Shanaka (19), who whacked Yuvraj Singh twice.

At half-way mark, the visitors had managed to put on board only 54 runs.

The wicket was assisting spinners and Dhoni had no hesitation in giving the ball to Jadeja and Raina. Soon Jadeja sent back Shanaka (19) by going through his defence.

Ashwin returned for his final over but could not add any more wickets to his tally but Raina scalped Sachitra Senanayke (8) and Thisara Perera (12) in a space of three balls.

Bumrah folded the innings by castling Dilhara Fernando (1) in the last ball of the 18th over.

Comments
Topics mentioned in this article
India Cricket Team Sri Lanka Cricket Team India vs Sri Lanka 2015-16 Ravichandran Ashwin Shikhar Dhawan MS Dhoni Cricket
Get the latest updates on ICC T20 Worldcup 2022 and CWG 2022 check out the Schedule, Live Score and Medals Tally. Like us on Facebook or follow us on Twitter for more sports updates. You can also download the NDTV Cricket app for Android or iOS.