India, after a series leveling win in the second Twenty20, will look to seal the deal with a win in the third Twenty20 in Vizag 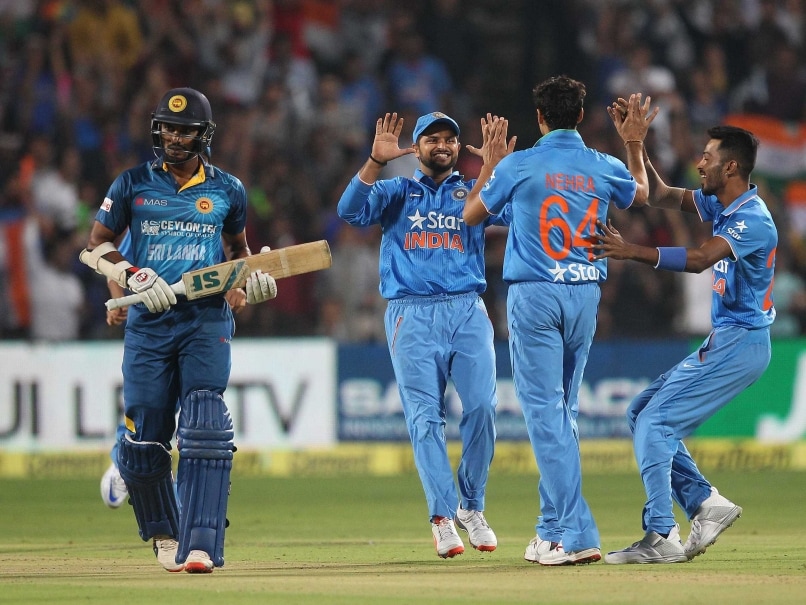 India, buoyed by an overwhelming victory in Ranchi on Friday, would look to continue the momentum and seal off their second successive Twenty20 series win when they take on Sri Lanka in the third and final Twenty20 International here on Sunday. (Ranchi Twenty20: Dhawan Powers India to Series-Levelling Win Over Sri Lanka)

India shrugged off their embarrassing defeat in opening match in Pune with a commanding show in Ranchi, where they outclassed the island nation by 69 runs to level the series.

The Indian batsmen had struggled to cope with the 'green' track in Pune but adjusted well on a slow strip at Ranchi, where they did not put a foot wrong.

The bowlers, too, were in complete control, never letting the Sri Lankan batsmen dominate. Moreover, skipper Mahendra Singh Dhoni's captaincy was impressive and all his experiments, be it reshuffling of the batting order or bowling tactics, paid off.

India not only mastered the conditions but also executed their plans to perfection.

The flying start that openers Shikhar Dhawan and Rohit Sharma provided India, gave Dhoni a chance to experiment with the batting order.

The move to send Hardik Pandya ahead of himself and Yuvraj Singh worked well as the young batsman came up with a fiery cameo. In Australia, Pandya did not get an opportunity to show his batting prowess but he certainly made an impression in Ranchi last night.

It required a lot of muscle power and accurate shot selection to get runs and Pandya did a decent job.

However, Yuvraj Singh, who came to bat at number seven, did not get enough time and was out for a duck. It will be good if the elegant left-hander get some time to spend in the middle before the next month's World Twenty20.

Dhoni has conceded that it will be difficult to send him up the order since the top-four are doing extremely well but showed intent of giving Yuvraj more chances to bat for longer period.

Dhawan was in terrific touch and he made batting look easy. Till now it was only Rohit who was tormenting the rival bowlers but with Dhawan also striking form, Indian batting wears a more assured look.

Ajinkya Rahane though struggled a bit, and Dhoni may be tempted to draft in Manish Pandey for the series-deciding match, even though he is not a big fan of disturbing a winning combination.

Dhoni had read the slow wicket well and employed smart bowling tactics, starting the attack with Ravichandran Ashwin, using all spin options available in the middle overs and holding back Jasprit Bumrah for as late as 16th over.

Though both Ashish Nehra and Bumrah did extremely well, Bhuvneshwar Kumar is expected to be more effective in the coastal city here as the conditions would suit his swing bowling during the evening.

The captain was sharp behind the wickets too, effecting two smart stumpings. The Sri Lankan pace trio of Kasun Rajitha, Dushmantha Chameera and Dasun Shanaka had wreaked havoc in Pune but they were hammered around in Ranchi by the in-form Indian batsman and the visiting bowlers are unlikely to get any respite.

Thisara Perera got a hat-trick but it came too late. Sri Lanka would hope that their batsmen do better, specially Tillakaratne Dilshan, who is the most experienced in the squad in the absence of many seniors.

With the series poised at 1-1, both the teams will be keen to end it on the winning note, going into Asia Cup and then World Twenty20 high on confidence.

T20 is a fickle format but it looks extremely difficult for the Sri Lankans to topple the home team unless they raise their game by several notches.

Comments
Topics mentioned in this article
India vs Sri Lanka 2015-16 Cricket
Get the latest updates on Fifa Worldcup 2022 and check out  Fifa World Cup Schedule, Stats and Live Cricket Score. Like us on Facebook or follow us on Twitter for more sports updates. You can also download the NDTV Cricket app for Android or iOS.