Virat Kohli produced a stunning effort in the field to dismiss a well-set Marnus Labuschagne in the 3rd ODI in Bengaluru. 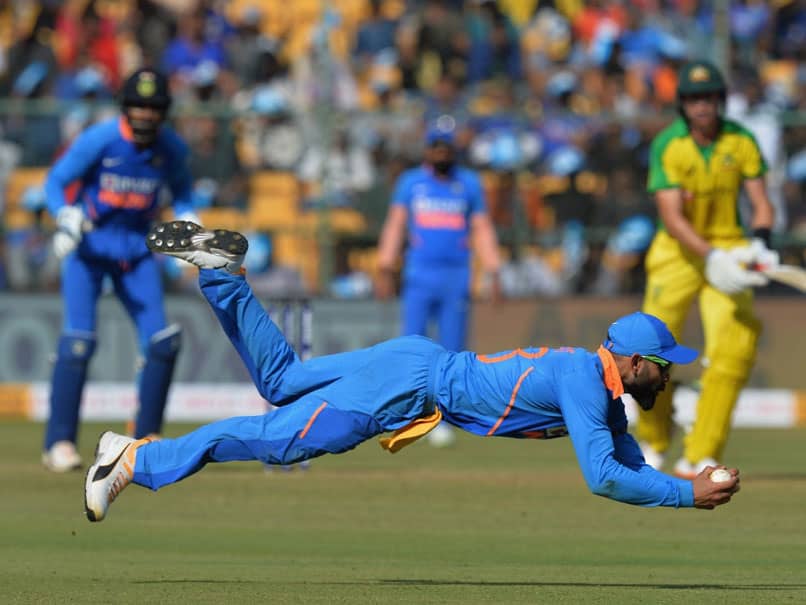 Virat Kohli dived to his right to take a stunning catch in the 3rd ODI against Australia.© AFP

Virat Kohli, India captain, took a stunning diving catch to get rid of a well-set Marnus Labuschagne in the ongoing third One-Day International (ODI) against Australia in Bengaluru on Sunday. Virat Kohli, stationed at short extra cover, dived full-length to his right to end Marnus Labuschagne's stay at the crease. Virat Kohli's brilliant catch ended a 127-run stand between Steve Smith and Labuschagne. The Board of Control for Cricket in India (BCCI) took to Twitter to hail the effort in the field by the India skipper and called him "Superman".

"Watch out! Superman Virat on the ground. This catch from #KingKohli we can totally watch it on loop," The BCCI tweeted.

Watch out! Superman Virat on the ground.

This catch from #KingKohli we can totally watch it on loop

In the match, Steve Smith went onto to score his ninth ODI century and his first since January 2017.

The visitors got off to poor start as Mohammed Shami removed David Warner in the fourth over.

Both batsmen were at the striker's end and Shreyas Iyer threw the ball to Shami who whipped the bails to send Finch packing.

Marnus Labuschagne then joined Steve Smith in the middle and the duo put on a stand of over 100 runs.

India captain Virat Kohli pulled off a stunning diving catch to get rid of Labuschagne and break the stand.

Australia tried to experiment with their batting order by sending Mitchell Starc as a pinch hitter but the move backfired as Starc fell for a duck trying to clear the rope, only managing to find Yuzvendra Chahal in the deep.