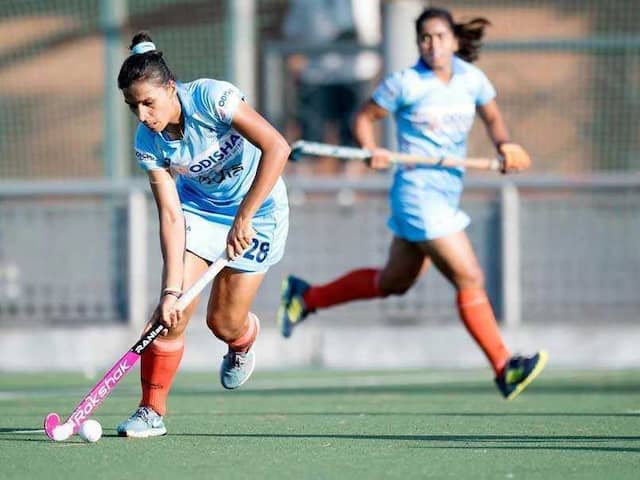 India will play against Ireland in the quarter-finals on Thursday.© Hockey India

The Indian women’s hockey team on Tuesday defeated Italy 3-0 at Lee Valley Hockey & Tennis Centre in London to enter the quarter finals of the tournament. India will now lock horns with Ireland on Thursday who defeated them in the group stages of the tournament. India started attacking from the word go in the do-or-die match as Lalremsiami scored the opening goal of the match in the ninth minute of the game. Post the first goal, India continued to play with aggression but were unable to score in the second quarter. With just seconds to go in the third quarter India earned a penalty corner and converted it into a goal with a brilliant deflection from Neha Goyal. With just 5 minutes to go in the final quarter Vandana Katariya too scored with a deflection making it impossible for Italy to level the scores.

India win 3-0 against Italy and qualify for the quarter final. Will meet Ireland on Thursday.

23:53 IST: Whistle from the referee and it's all over for Italy.

23:49 IST: Navjot misses to score the fourth goal for India. That was an easy chance but Italian goalkeeper blocks her shot with ease.

23:47 IST: GOAL! Another penalty corner for India and this time India scores with a brilliant deflection from Vandana. IND 3-0 ITA

23:45 IST: Penalty corner for India with just over 6 minutes remaining in the game. Can India make it 3-0?

23:44 IST: That was a brilliant scoring chance for Italy and Jasbeer Singh but she deflects the ball over the net.

23:40 IST: Miss from Vandana! That could have been all over for Italy but Vandana loses the ball under pressure.

23:36 IST: Good save from Savita and cleared with ease by Deepika. India with the counter-attack, earn a long corner. IND 2-0 ITA

23:36 IST: Penalty corner for Italy in the opening minutes of the final quarter.

23:32 IST: GOAL! Neha Goyal scores the second goal for India as team ends the third quarter with a 2-0 lead against Italy.

45' GOAL! Neha Goyal gets to the ball in the midst of scramble from Gurjit's shot and rolls the ball into an open goal!

23:31 IST: Penalty corner for India just seconds before the end of third quarter.

23:28 IST: Powerful stroke from Rani but Italian defenders clear the ball with ease.

23:27 IST: Penalty corner for India with just over four minutes to go in the third quarter.

23:26 IST: Skipper Rani steals the ball but alert Italian defenders block her outside the circle.

23:24 IST: Long corner to India as they continue to dominate Italy in the third quarter.

23:21 IST: Sunita Lakra gets a green card from the umpire.

23:18 IST: Missed chance for India! That was an easy chance but Navneet Kaur fails to end the ball inside the net.

23:16 IST: Lively start from Italy in the opening minutes of the third quarter, looking to level the score but alert Indian defence has been up to the mark. IND 1-0 ITA

23:14 IST: Whistle from the umpire and the third quarter begins.

23:02 IST: The Italians are desperately looking for the equalizer but are being held by the Indian defenders brilliantly. Just under one minute remaining in the second quarter.

22:58 IST: Under 5 minutes remaining in the second quarter as India continue to attack. IND 1-0 ITA

22:55 IST: With 21 minutes into the game, India have 53 percent of ball-possession. Lalremsiami's goal in the ninth minute has been the difference between both the teams.

22:50 IST: Dominating start from India at the start of the second quarter looking to extend their lead.

22:49 IST: Whistle from the umpire and the second quarter begins.

22:46 IST: Italian team working hard inside the Indian half to level the scores but Indian defenders are up to the mark.

9' GOAL! India draws first blood in this decisive game as Lalremsiami uses some clever movement to get to the ball in the midst of a scramble in the circle. India lead by 1!

22:39 IST: First penalty corner of the match. India in with a chance with 9 minutes into the game.

22:34 IST: The Italian team looking for spaces inside the opposition circle but Indian defenders are keeping it tidy.

22:33 IST: Indian team in the white jersey looking strong at the start, dominating the ball possession in the opening minutes.

22:30 IST: Umpire blows the whistle and the first quarter begins.

22:25 IST: Both teams are at the centre along with the match officials for the national anthems. We are just minutes away from the start.

22:15 IST: Indian women started the tournament with a 1-1 draw against England followed by a 0-1 loss against lower-ranked Ireland. The team drew their final group stage encounter against USA 1-1. Italy, on the other hand, won their opening game of the tournament 3-1 against China. They then won 1-0 against Korea but lost badly (1-12) to Netherlands to land in the cross-over stage.

22:00 IST: We are just 30 minutes away from the first match of the day which is between India and Italy. The second cross-over encounter of the day will be played between England and South Korea.

Here’s how the starting XI for Indian Women’s Team will line-up for their cross-over game of the Vitality Hockey Women’s World Cup London 2018 against Italy. Catch the action LIVE at 10:30 PM (IST) today!#IndiaKaGame #HWC2018 #INDvITA pic.twitter.com/gnv4dEJKWJ

21:30 IST: Hello and welcome to the live updates of the Women's World Cup match between India and Italy.

India started the tournament with a draw against England. Neha Goyal's goal had put India in the lead, but Lily Owsley scored the equaliser for England, helping the world number 2 team draw the first clash of the Pool B. In their second Pool B match, India lost to Ireland 0-1. Speaking about India's performance against USA, Rani said, "Ahead of the match against USA, when we had the team meeting, we discussed how this is our do-or-die match and though we all knew a draw would be enough, we wanted to go for the win. I think that 'hunger to win' attitude helped us on Sunday." "During our training sessions we play a lot of games, or involve in match-situations where we are under pressure and work on how we can play without taking outside pressure of a packed stadium. We enter a match with the attitude that if we play a good match then the crowds will support us and that we must fight for the ball. I am proud of how the team played against USA and now we need to once again do everything we can to win against Italy," the Indian skipper remarked.

Italy, on the other hand, started their tournament with a 3-0 win against China in their first Pool A match. Italy continued their momentum with a 1-0 win against Asian Champions Trophy winner Korea but were pummelled 1-12 by the Netherlands in their third and final Pool A match. Rani feels her team must take Italy as a serious contender and draw inspiration from their victory at the 2015 Hockey World League Semi-final Tournament, where they had beaten Italy in a shootout. "Italy is a good team and they have enjoyed good wins in this tournament too. But we need to go into the match with the self-belief that we can beat them and we must draw inspiration from the 2015 Hockey World League Semi-final Tournament where we beat them in a thrilling shootout," Rani asserted.