Women's Hockey World Cup: India knocked out after a 1-3 defeat in the quarters. 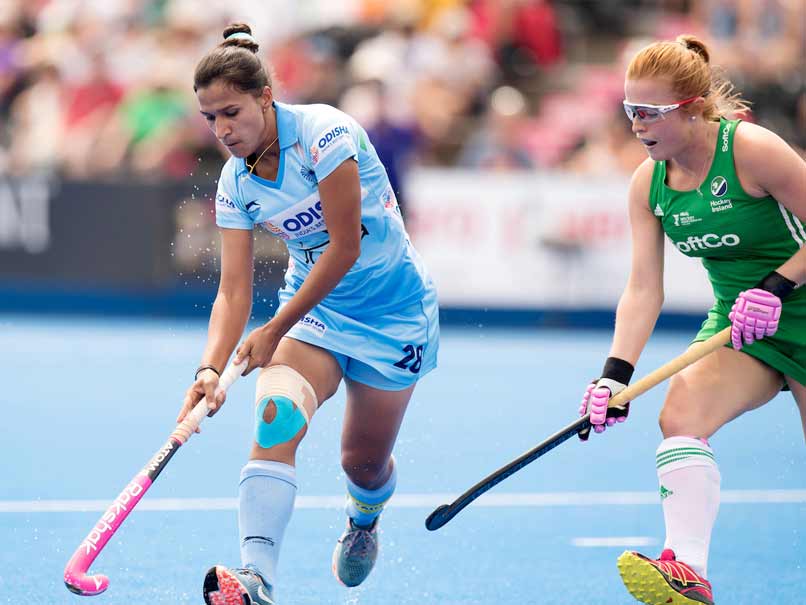 India lost 1-3 in the tie-breaker against Ireland in the first quarter-final of the Women's Hockey World Cup on Friday. Ireland created most of the opportunities from the onset while India controlled possession. However, India's possession went haywire as they failed to create enough opportunities. In the shoot-out, the Ireland goalkeeper Ayeisha McFerran did well to keep the Indian women out. Ireland will face Spain in the first semi-final on Saturday.

00:07 IST: Thank you, for joining us on the all the action, until next time, it's goodbye!

00:01 IST: GOAL! Ireland win 3-1 in shoot-out, to book themselves a semi-final berth. Ireland will play Spain in the first semi-final on Saturday. Heart-break for the India fans, but undoubtedly Ireland were the better side.

23:54 IST: Rani Rampal hits the post! McFerran keeps her out.

23:53 IST: Ireland to go first in the shoot-out. Nicola Daily misses it.

23:47 IST: Shirley Mckay plays it forward, but Ireland fails to keep control on the ball. India come forward through Monika, plays it deep but the Ireland defence, keeps it out.

23:44 IST: Udita collects a green card, India down to 10 players. 3 minutes to be played. India clearing every ball that is coming their way, keeping the area near the circle, clear. Looks like we are going to a shoot-off here.

23:41 IST: Vandana asks for a referral, she feels she was pushed. The umpire rules it in favour of the Irish side.

23:40 IST: Rani Rampal inside the circle, gets past one defender but she has been penalised by the umpire and Ireland get a chance to attack.

23:39 IST: Navneet attacks for India, spins past Matthews, India still look better on possession but they end up making abrupt passes to no one in particular. 7 minutes to be played!

23:26 IST: Irish goalkeeper McFerran saves and clears Rani's shot from top of circle. No side has been able to break the deadlock yet. 8 minutes to play in the final quarter.

23:32 IST: Daly Nicola breaks from the right wing. But the Indian defence once again does well to keep the Irish attack out.

23:30 IST: The fourth quarter starts, Wilson guides the ball on the right wing for the Irish. But India return on the possession, their attack has been blocked.

23:27 IST: India get a chance to break on the counter, Rani Rampal steers the ball forward but Lalremsiami tumbles inside the circle as Ireland retain possession.

23:26 IST: Free-hit for Ireland, goes inside the circle but India does well to keep the attack out. Nearly two minutes to play in the third quarter.

23:24 IST: Nicola Evans penalised inside the circle, she looked well in possession to hit the ball inside the posts. Still goalless!

23:22 IST: Five minutes to played in the third quarter, Daly Nicola plays through a reverse stick to put the ball inside the circle, but well defended by India.

23:20 IST: Ireland dominating the second-half from the onset, India on the back foot. Not letting India take a hint of possession.

23:17 IST: Wilson plays the ball wide to the right, Ireland stretching India's defence creating space. There has been no penalty corner so far.

23:15 IST: Shirley McKay with a shot, from the right wing but the ball goes on the wrong side of the post. The deadlock yet to be broken. 32 minutes played.

23:13 IST: Ireland gets the second-half underway!

HT | The Indian Eves are locked in a challenging contest against Ireland during their Quarter Final match at the Vitality Hockey Women's World Cup London 2018 as neither side gives way before the halfway mark on 2nd August.#IndiaKaGame #CheerForEves #HWC2018 #INDvIRE pic.twitter.com/iVqfXD5wqd

23:09 IST: STATS - Both India and Ireland had one shot on goal, Ireland had created six circle penetrations to India's five. But India hold a 53-47 edge over Ireland in possession, they need to make it count in the second-half.

23:03 IST: End of second quarter, it still stands India 0-0 Ireland. Ireland edged India in creating real chances in the first-half. India, on the other hand, have looked strong on the defence. They have kept the Irish attack out on plenty of occasions.

22:56 IST: Well saved by Savita! First real chance for Ireland but the Indian goalkeeper charges towards the ball to keep the diving effort from O'Flanagan out which came from a ball in by Mullan. 5 minutes to be played in the second quarter.

22:53 IST: India have stretched the Irish defence, they look the stronger side in the begininning of the second quarter. Meanwhile, Neha Goyal collects a green card for her team.

22:50 IST: Brilliant interception from Ireland, India were looking to break on the attack. 17 goalless minutes.

22:48 IST: The second quarter gets underway.

22:46 IST: India build-up one final attack in the first quarter, Navjot Kaur charges from the left wing but fails to get her composure right. At the end of first quarter, it's India 0-0 Ireland.

22:44 IST: No shots on goal so far for both the sides, Ireland had three circle penetrations in comparison to India's two. One minute to play in the first quarter.

22:42 IST: India did well to impose threat on the Ireland through the left wing, but an abrupt pass, gift Ireland back the possession.

22:39 IST: Free-hit for Ireland, just near the circle but the Irish failed to penetrate through the India defence. India clearly relying on their defence to keep the Irish out. 10 goalless minutes played in the first quarter.

22:37 IST: Vandana breaks forward from the left wing, but her acceleration has been brought to an halt by O'Byrne. Ireland looking the stronger side in the first quarter.

22:35 IST: Sunita Lakra plays the ball wide, tries to stretch the Irish defence. India try to penetrate inside the circle from the right wing.

22:33 IST: Good work from Navjot Kaur in the centre, she is trying to hold the ball for India.

22:30 IST: India gets the match underway. Ireland begin with long pass as they look to break free inside the circle, but the India defence keeps it out. All-out attacking start by the Irish.

22:00 IST: Semi-final berth in the World Cup at stake! Here is how both Ireland and India have lined-up for the vital clash. Half an hour for the match to get underway.

21:32 IST: Looks like the Irish women have enjoyed their training session last evening in anticipation of the clash against India.

21:30 IST: It's now or never! One hour for the crucial clash to get underway. India will be eyeing to get better of the Irish women's on this occasion.

21:05 IST: P.R. Sreejesh has sent out a message for the women in blue. He backs them to bring the World Cup home!

21:00 IST: Hello and welcome to the live commentary from the quarter-final match between India and Ireland.

In the Crossover Match against Italy, it was Lalremsiami (ninth minute), Neha Goyal (45') and Vandana Katariya (55') who scored in India's significant win. It was a dominant overall performance that saw them make the next round and in hindsight, Rani believes the team has improved match-by-match where they have drawn 1-1 to World No.2 England, lost 0-1 to Ireland, drew 1-1 with the USA in the Pool Stage followed by a triumphant 3-0 score-line against the Italians.

Beating Ireland, who are high on confidence after a 3-1 win against USA and India 1-0 to top Pool B and earn a direct qualification for the quarters, would be a tough task especially if the Irish can pull off a good start to put pressure on India's structure. Rani though was categorical in her stance that this is a once-in-a-lifetime opportunity for her team to create history.

Comments
Topics mentioned in this article
India Women Hockey Live Blogs
Get the latest updates on IPL 2021, IPL Points Table , IPL Schedule 2021 , live score . Like us on Facebook or follow us on Twitter for more sports updates. You can also download the NDTV Cricket app for Android or iOS.