Gurjit Kaur scored a hat-trick to ensure India progressed to the semis. 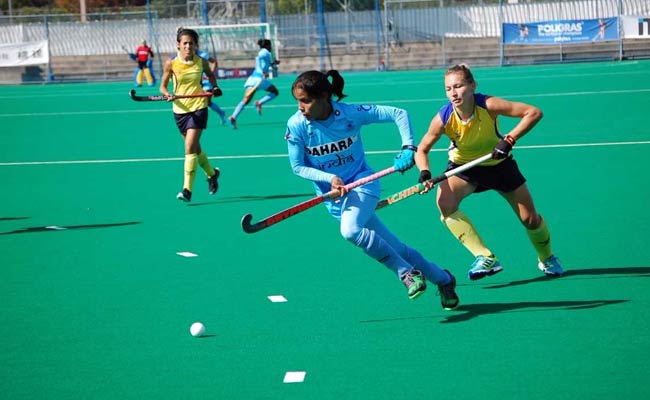 Drag-flicker Gurjit Kaur notched up a hat-trick as India hammered Kazakhstan 7-1 to enter the semifinals of the women's Asia Cup hockey tournament on Thursday. Gurjit was in sublime form as she pumped in three goals (4th, 42nd and 56th minute), while Navneet Kaur scored twice (22nd and 27th minute). Deep Grace converted two penalty corners (16th and 41st minute) to ensure India remained unbeaten in the
tournament. After an early setback, when Vera Domashneva scored a field goal in the second minute to give Kazakhstan a 1-0 lead, India made amends when a tactical maneuver in the circle wonthem a PC in the fourth minute.

The in-form Gurjit hardly broke a sweat to fiercely strike the ball past Kazakhstan goalkeeper Guzal Bakhavaddin and equalise, Hockey India said in a release.

The Rani Rampal-led forward-line was smart in its attacks as they created penalty corners to put their opponents under pressure. The plan worked as a PC won in the 16th minute was brilliantly converted through Deep Grace's well-struck drag-flick that gave India a 2-1 lead.

In the following minutes, Navneet scored back-to-back field goals to take India's lead to a comfortable 4-1 at the end of second quarter. Another PC awarded in the 41st minute was beautifully converted by Deep Grace that took India's lead to a strong 5-1.

Gurjit was splendid with her drag flick and converted her second goal through PC in the 42nd minute to ensure India were on path to a big win. The 22-year-old Gurjit struck yet another PC in the 56th minute as she registered a hat trick of goals and end the match in India's favour with a 7-1 win.