For Sandeep Singh, the HIL not only marks the new beginning for Indian hockey but also for the players, who got the much-needed financial impetus because of the league. 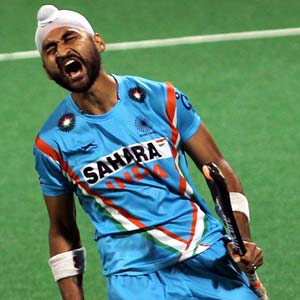 Once the blue-eyed boy of Indian hockey, Sandeep Singh of late is struggling to earn his place back in the national team, but the ace drag-flicker knows a strong performance in the upcoming Hockey India League can put his beleaguered career back on track.

Sandeep hogged the limelight in last year's Olympic qualifiers riding on his impressive penalty corner conversion rate. But he turned into a dud in the events thereafter, including India's disastrous London Olympics campaign, which finally led to his ouster from the national team.

With India's chief coach Michael Nobbs hinting that non-performing seniors would find it difficult to make a comeback in the wake of a young team's impressive performances in the Champions Trophy and the Asian Champions Trophy, Sandeep is desperate to make the HIL count.

"I am out of the team for quite sometime now and it pains. My main focus would be to make a comeback in the national team through the HIL and for that I will have to come up with impressive performances," Sandeep told PTI in an interview.

"I will give my heart and soul in the HIL to make the selectors take notice of me," said the penalty corner specialist, who will turn out for Mumbai Magicians in the inaugural franchise-based event.

For Sandeep, the HIL not only marks the new beginning for Indian hockey but also for the players, who got the much-needed financial impetus because of the league.

"HIL is a boon for Indian hockey. A competitive HIL can do wonders for India hockey. The tournament will promote young talents and give them the opportunity to play alongside and against some of the best in the business," he insisted.

"Playing alongside top international stars like Jamie Dwyer, Teun de Nooijer and Moritz Furste will provide huge experience and knowledge to the youngsters.

"HIL boasts of a high-class list of players and coaches like Ric Charlesworth, Barry Dancer etc. The event will only help the players get better," said Sandeep.

"The monetary part is also very important. The youngsters will get motivated and try to push themselves harder because of the financial reward," Sandeep added.

Sandeep was one of the five marquee players but he turned out to be damp squib in the HIL players auction, fetching a disappointing USD 27,800 (Rs 15.13 lakh), his base price, from the Mumbai outfit.

Even though disappointed, Sandeep preferred to look at the positive side.

"I am obviously disappointed as being a marquee player I was expecting more. What transpired or what was in the franchise's mind during the bidding process I don't know. But I will try to give more than 100 per cent for my team," said Sandeep, who was left red-faced during the silent bidding of the marquee players.

Sandeep is also hoping to gather as much knowledge as he can from Australian legend Ric Charlesworth, the coach of the Mumbai Magicians, during the inaugural HIL to be held from January 14 to February 10.

"Ric Charlesworth is a legendary figure. He is one of the best coaches in the world. I hope to benefit a lot from him during the league," said the drag-flicker from Haryana.