Rupinder Pal Singh, for the first time in his career, has scored 10 goals in a hockey tournament with his rasping drag-flicks at the Asian Champions Trophy 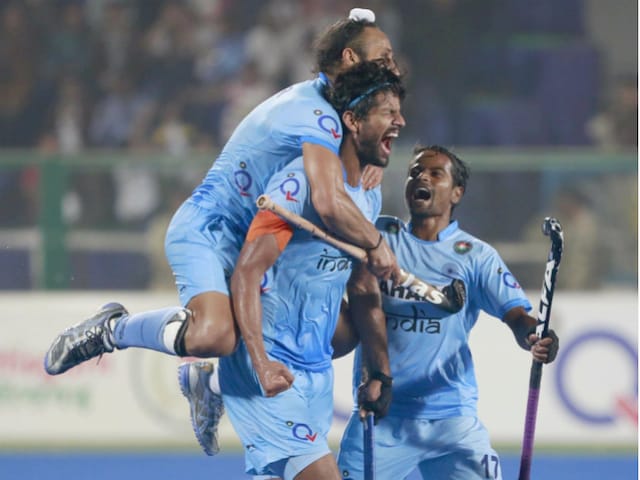 Rupinder Pal Singh is in scintillating form for India at the Asian Champions Trophy.© HI

By his own admission Rupinder Pal Singh is witnessing a "dream run" in the ongoing Asian Champions Trophy here but the ace India drag-flicker said he was just doing his duty as his role in the team is to score goals from penalty corners.

For the first time in his career, Rupinder has scored 10 goals in a hockey tournament with his rasping drag-flicks here.

Starting with six goals in India's tournament opener against Japan, Rupinder scored one goal against Pakistan and one against China before producing both Indian goals in the 2-1 victory over Malaysia yesterday.

The lanky Indian penalty corner shooter, who mostly plays deep defence, says he is now eager to add a few more goals to his tally in the knockout rounds starting with the semi-finals on Saturday.

"I would call this a dream run. Obviously, I am feeling great. It is indeed a special feeling when you score crucial goals," said Rupinder.

"I have a role to play in this team, and scoring goals from penalty corners is what I am here for," said Rupinder, whose romance with Malaysian grounds continues six years after he made his international debut in the Malaysian city of Ipoh.

"It was in Sultan Azlan Shah Cup that I made my debut for India in 2010 and the next year I got a hat-trick of goals against Great Britain in the same tournament," said the lanky defender, who turns 26 next month.

"Those are all part of my fond hockey memories."

In the tournament so far, the Indian team has not felt the absence of multiple penalty corner options and the role of another short corner specialist, Jasjit Singh Kular has been limited because Rupinder has been on fire.

The opening match of this tournament provided Rupinder his career-best of six goals in a match. He was already India's highest scorer this year even before the start of the Asian Champions Trophy with seven goals from 20 matches.