India take on Netherlands in the opening match of the Junior World Cup hockey. The tournament is from December 6-15 in New Delhi. 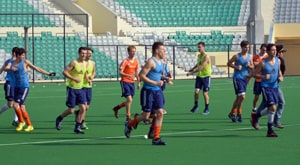 Last edition's runners-up, Netherlands definitely start as favourites against India in their opening match of the Hockey Junior World Cup and coach Sjoerd Marijne on Monday said his wards are confident of starting their campaign on a winning note in the December 6-15 event.

"The team is very tough and stable and we are geared up for the challenge. All the teams are strong and anyone can win a match on the given day. But the boys are confident about their first match against India and we aim to start this tour with a win," Marijne said after Netherlands second practice session at the Major Dhyan Chand National Stadium.

"I am waiting to see my friends from Ranchi Rhinos. Here I am as a team manager and my job is to share my experiences and guide them to give their best game during the tournament," said Evers who played for champions Ranchi Rhinos in the inaugural Hockey India League.

"The players in this team have the speed and are good with technical aspect of the game and we are confident of our opening match (against India)," he said.

Evers also spoke highly about India captain Manpreet Singh and Mandeep Singh, who were his teammates in Ranchi Rhinos.

"They are my friends and I am waiting to meet them here. I am hoping that Mandeep plays as well as he did in the HIL last year.

"For me the toughest players in the Indian side are these two and I hope we see Indian and Netherlands in the final. The young Indian side is a tough team," he said.

Comments
Topics mentioned in this article
Hockey Mandeep Singh Manpreet Juneja India Cricket Team Netherlands Deccan Chargers Royal Challengers Bangalore Kings XI Punjab
Get the latest updates on IPL 2020, check out the IPL Schedule for 2020 and Indian Premier League (IPL) Cricket live score . Like us on Facebook or follow us on Twitter for more sports updates. You can also download the NDTV Cricket app for Android or iOS.