India crashed out of the quarterfinal race of the ongoing World Cup after being held to a 3-3 draw by Korea in their must-win Pool C match on Tuesday. 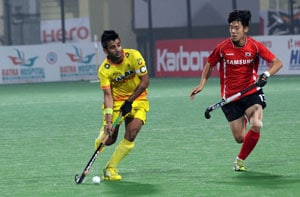 Keen to redeem some pride and finish inside the top 10 bracket, India team on Wednesday sweated it out during the practice session and worked on the strategies ahead of their 9th-12th classification match of the Junior World Cup hockey against Argentina.

India skipper Manpreet Singh insisted that his team was looking to secure 9th position in the tournament.

"The team is putting in best possible efforts for the match tomorrow against Argentina. No doubt, the players are little disappointed about the loss against Korea yesterday, but we are looking forward to secure the 9th position in the tournament and have kept our hopes high," said Manpreet after the team's practice session here at Major Dhyan Chand National Stadium.

"We are focusing on a review of the previous matches so that we do not repeat the mistakes made," he added.

India crashed out of the quarterfinal race of the ongoing World Cup after being held to a 3-3 draw by Korea in their must-win Pool C match on Tuesday.

Talking about Tuesday's performance, Manpreet said, "We tried our best against Korea and had put forward fast attacks till the end, but ended up losing with a hard luck. Moreover, I was given a green card which turned the table round in the game. Any small or big change during the game affects the players and creates a huge impact on the overall match.

"Few of our players like Talwinder Singh, Amit Rohidas and Imran Khan played extremely well. The Korean players were very strong at their defense part, which was one of the major reasons for their victory."

The skipper, however, felt that the team structure need not be changed.

If India win against Argentina on Thursday, they will take on the winner of the match between Pakistan and South Africa in the 9th-10th place play-off match on Saturday.

Argentina also practised hard ahead of tomorrow's match against India and their coach Carlos Geneyro said his team was prepared to challenge the hosts.

"We tried our best to finish in the last eight but things didn't turn out according to our plans. It's disappointing but the team is ready to fight it out against India tomorrow," Geneyro said.

"India is the home team and will get support from the spectators but we are focused and will go for a win," he added.

The coach said his team was unlucky not to have got enough penalty corners during the three matches in the league stage.

"There aren't any problem areas. It's just that we didn't get many penalty corner opportunities, which we could have converted. But it's part of the game and we were just unlucky," he pointed out.

While captain Gonzalo Peillat felt that some of the umpiring decisions did not go Argentina's way.

"We are not happy with some umpiring decisions in the league matches where video referrals were not given but we can't do much about it. We were unlucky," said Peillat.

He expressed confidence of doing well against India.

"Team is confident of a win against the home side and they want to finish with top rankings in the tournament. There is no pressure on the boys and they are hopeful of a good contest against Indian team tomorrow," Peillat, who also competed for the national team in the men's tournament at the 2012 Summer Olympics, said.

Comments
Topics mentioned in this article
Hockey Manpreet Juneja
Get the latest updates on India vs South Africa and check out  Schedule, Results and Live Score. Like us on Facebook or follow us on Twitter for more sports updates. You can also download the NDTV Cricket app for Android or iOS.