Son of a truck driver, Harjeet has turned his life around from playing in torn shoes to being named the most promising player of the Sultan of Johor Cup. Overnight fame however has only cemented his will to succeed further. 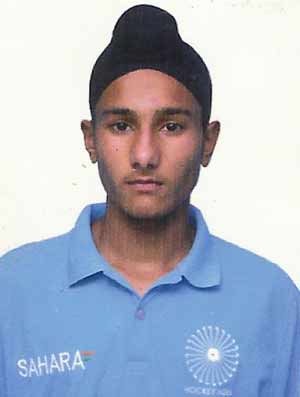 Soon after returning to India from Malaysia, 17-year-old Harjeet Singh was seen celebrating with his friends and family at a function held to honour him in his native town Kurali, near Chandigarh. Harjeet was recently named the most promising player at the Sultan of Johor Cup under-21 hockey tournament held in September in Johor Bahru, Malaysia. India won the tournament, beating the hosts in the final, and the lanky centre left a powerful impression with his skills with the stick.

Son of Rampal Singh, a truck driver, Harjeet was delighted to share his 'biggest achievement till date'. His father, as he went about his daily chores, told NDTV that even though the family had to face a lot of hardship to support their son's passion, a sense of pride best describes them today.

There was a time when Harjeet was asked by his parents to quit playing hockey owing to financial constraints at home, but the young lad's determination paved the way for his success. His mother Balwinder Kaur added that the family did not receive any aid from the government as his son pursued his hockey dream. NDTV learnt that Harjeet had to wear torn shoes and walk down the road to play his favorite sport at the local Gopal Hockey stadium. Despite achieving overnight fame, Harjeet's first thoughts turn to his family. He wants to give the 1,00,000 rupee cash prize from Hockey India to his parents, buts adds that he will 'borrow' a little to buy new shoes and a hockey stick.

Harjeet started playing hockey in 2004 at the local stadium in his hometown before shifting base to the Surjeet Hockey stadium in Jalandhar in 2008. He soon became an integral part of the Punjab junior team which won the junior national title in 2012 and 2013. He was then called up to the Indian U-21 side for the Johor Cup and the rest, as they say, is history.

The 17-year-old's will, determination and support from his family has ensured that Harjeet's dream to play hockey has come true. Yet, he seems to have a very level head on his young shoulders, and realizes that he has a long way to go and a lot more to achieve. He will head to Delhi after the celebrations in his hometown, to train for the upcoming Junior Hockey World Cup in December. Harjeet hopes for a repeat performance at the World Cup and says there is no option for him but to win.