The Minister felicitated the Indian junior men's hockey team by awarding a cheque of Rs one lakh to each of the 18 members and head coach, Gregg Clark for winning third Sultan Johar Cup tournament. 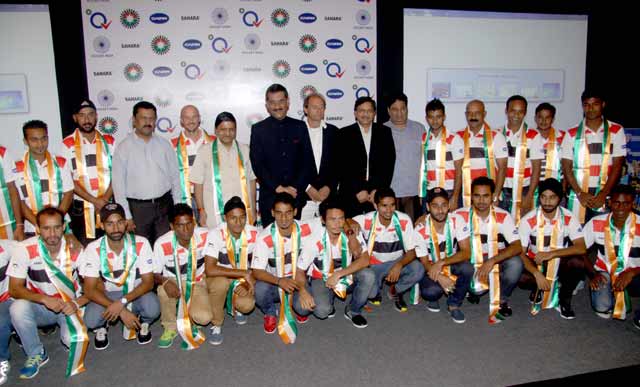 Elated with junior men hockey team's performance at the recent Sultan Johar Cup, sports minister Jitendra Singh on Thursday, announced the government's decision to allocate double funds for training and setting up of new infrastructure for hockey in the country.

"The government of India has doubled its allocation towards hockey training. We have got the best of coaches, best of performance director, foreign coaches. We are also setting up two new astro turfs in Bangalore," said Jitendra.

"We would also be setting up a new infrastructure for hockey all over the country," he added.

"I am very proud because the team has brought the lost charm and legacy of hockey. The commitment of the young people, who have got laurels to the country...nobody could be more proud than me," said Jitendra.

He also informed that the ministry is on the verge of introducing a performance measurement system for all coaches so that their performances could be analysed.

"What new we have done this year is, we will be introducing performance measurement system for all coaches. We need to see what has been the performance of our coaches. If the coaches have done well then their term should be extended and if they are not doing well, we have to get somebody else," said the minister.

There have been reports that the appointment of foreign coaches for nine disciplines is pending due to red tape with the Sports Authority of India (SAI) awaiting the sports ministry's approval for its recommendations.

Asked if the reason for the delay is because the ministry is yet to appoint a new sports secretary to sign the files after P K Deb retired last month, Jitendra clarified, "No no, not really!"

"The Sports Secretary is not needed for any of the papers to be signed. The fact is, the process of appointing foreign coaches is a very lengthy. There is a committee of SAI and the federations who have to sit together and decide who is the best coach," explained Jitendra.

He insisted that there are no more names pending.

"As far as I know no names are pending. I have had a review meeting about our preparedness for the Commonwealth Games and Asian Games just last week and we told the federations that we need the names," said Jitendra.

Even director general of SAI, Jiji Thomson, made it clear that the names of all the coaches are being cleared and the minister has been signing the files.

"All the names of the coaches should be cleared in another couple of days. I have recommended all the names and the minister has been singing the files," said Thomson.

"The sports secretary in any case does not clear the files. It is done by the minister himself," he added.