India's Lalremsiami scored the opening goal of the match to give her side an early 1-0 lead. 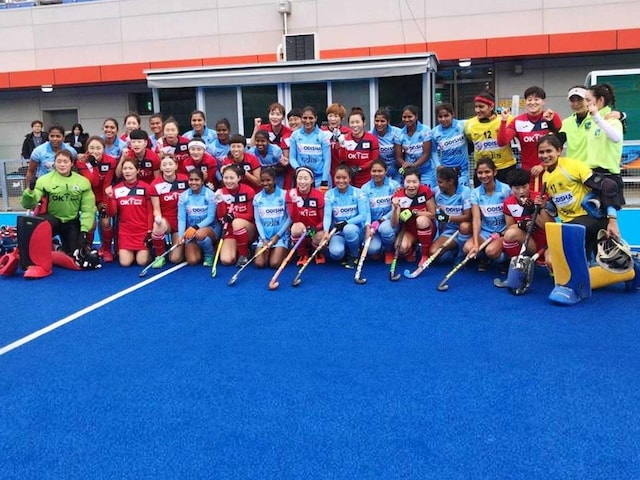 The Indian women's hockey team started their South Korea tour with a 1-0 win over the hosts in the first hockey match of the five match series at the Jinchun National Athletic Centre on Monday. India started the match on a positive note as they focused on stringing together some passes, which saw them keep possession in the opposition's half in the opening few minutes of the first quarter. It was in the fifth minute that the visitors attacked the South Korean defense and found a way past their goalkeeper Mijin Han as India's Lalremsiami scored the opening goal of the match to give her side a 1-0 lead.

The Indian team looked in good shape as they were making forays into the opposition's half regularly and were defending well as a unit, which meant that they kept their 1-0 lead intact at the end of the first quarter.

In the second quarter, India were rewarded with a penalty corner in the 18th minute, but the South Koreans guarded their goal well as the shot from the Indians was saved by Mijin Han.

Three minutes later, another penalty corner was saved by the hosts as India looked to take advantage of their opportunities but the South Korea goalkeeper made another fantastic save to keep her team in the match.

It was South Korea's turn to take the Penalty Corner in the 23rd minute but they could not be efficient with their finishing as Indian goalkeeper Swati made the save to keep her team's lead intact.

It was a crucial phase in the match as World No. 9 South Koreans were constantly looking for an opening to equalise the scores, but the Indian defense was sticking to their task well as the third quarter was dominated by the hosts.

Both the teams were looking to attack each other on the counter but the majority of the action was took place in midfield, which saw Vandana Katariya and Monika, both earning themselves a green card each towards the end of third quarter.

In the fourth quarter, India's goalkeeper Swati playing in her debut match made some important saves to keep India's 1-0 lead intact.

The 24-year-old Indian goalkeeper saved two penalty corners in the opening six minutes of the fourth quarter and became a decisive factor in her team's 1-0 win when she saved a Penalty Stroke in the 50th minute to deny the hosts a way back into the match.

The final few minutes were all about India keeping their defensive shape, and going for a second goal which would guarantee them the victory.

The visitors were awarded two more penalty corners in the last few minutes but their efforts were kept out by a well-organised South Korean defense.

India will play their second match on Tuesday.