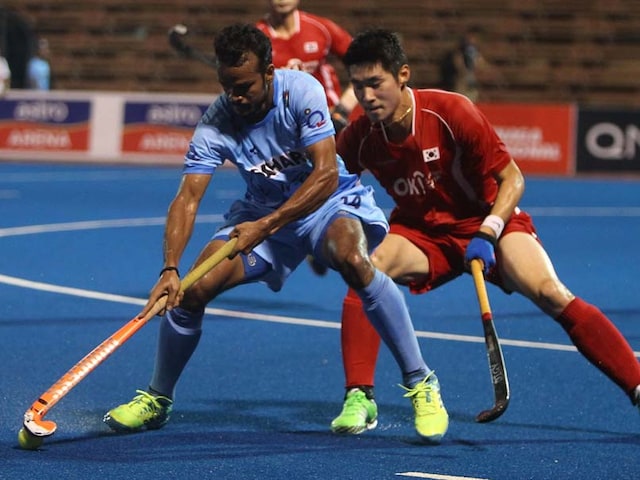 Top-ranked India will take on South Korea in the semi-finals of the fourth Asian Champions Trophy after the Koreans conceded a late equaliser to Malaysia and finished fourth in the round-robin league standings here on Thursday.

India had topped the league standings with 13 points after finishing their preliminary fixtures, but there was plenty of drama on the last day of the league fixtures.

Pakistan defeated China 4-0 to take their points tally to nine, the same as Malaysia before the last outing against the Koreans, who had seven points ahead of the last match. Pakistan's goal-difference was far inferior to that of hosts Malaysia, so a tie on points would put Malaysia ahead.

Malaysia needed a victory or a draw to take the second spot in the group, but a victory in the last outing would have lifted the Koreans to the second place in the standings, pushing Malaysia down to the third spot and Pakistan to the fourth.

In case of a Korean victory, India's semifinal would have been against Pakistan.

Indian defender Surender Kumar will not play any role in the ongoing fourth Asian Champions Trophy hockey tournament after being suspended for two matches following a deliberate foul during the game against Malaysia.

The Indian defender, whose good performance in the Champions Trophy earned him a place in the squad for the Olympic Games, will have to sit out of the knockout round, starting with the semifinal on Saturday.

"Surender was shown a yellow card by the umpire for an off-the-ball incident in which Surender lifted his stick in an appropriate manner, thereby causing his stick to hit the chin of a Malaysian player," Appoo said in a statement.

"Having considered the evidence before me, including the explanation given by Surender, I have imposed a two-match suspension."