VR Raghunath, Mandeep Singh and Harmanpreet Singh scored one goal each as India squandered a 3-1 lead to draw against title holders Germany in the Champions Trophy opener. 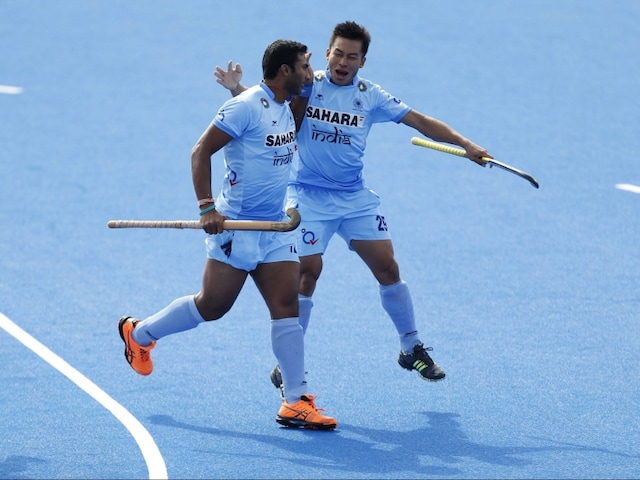 Indian drag-flicker VR Raghunath (Left) scored the first goal of the match against Germany in the Champions Trophy opener.© PTI

India's defenders squandered the lead as Olympic champions Germany clawed their way back to earn a 3-3 draw on the opening day of the 36th Champions Trophy hockey tournament in London on Friday.

Enjoying the lead for most part of the encounter, the Indian defence wilted under late Germany pressure to concede the equaliser to Germany just three minutes before the hooter at the Lee Valley Hockey Centre.

Jonas Gomoll converted a 57th minute penalty stroke with a deft flick to save Germany the blushes after they had trailed behind the Indians.

From the moment V R Raghunath converted the first Indian penalty corner in the sixth minute, India had enjoyed the lead throughout, except for one minute when Germany equalised in the first quarter.

The under-pressure Indian defenders conceded nine penalty corners and several of them were soft fouls, while their own strikers earned four at the other end.

The game began with the Indian defenders rushing out to block the early first penalty corner for Germany. The Indians then had a first look at the rival goal in the fifth minute, but Akashdeep Singh's shot was blocked by goalkeeper Tobias Walter.

Indian took the lead in the sixth minute as Raghunath converted the first penalty corner with a low drag flick into the left corner that beat the outstretched hands of custodian Walter.

Two minutes later, Indian captain and goalkeeper P R Sreejesh warded off danger by diving of his left to block a push in the crowded circle.

A huge round of applause for Danish Mujtaba & @manpreetpawar07 as they complete their 150th Int'l match for India! pic.twitter.com/zbcIF5JQjG

Striker S V Sunil picked up a diagonal ball inside the circle to shoot into the goal in the 18th minute, but it was disallowed after review, when the video umpire ruled that the ball had touched his foot.

Germany equalised through a penalty corner conversion by Grambusch in the 25th minute. Grambush's low drag flick went off the goalkeeper's pads into the net.

India regained the lead in the very next minute when Sunil's fine solo on the right run took him into the scoring circle. Sunil created the goal with a fine pass to Mandeep, who flicked past the custodian from close range.

Young penalty corner shooter Harmanpreet replicated the earlier shot by Raghunath as he placed the second penalty corner into the right corner to give India a 3-1 lead in the 32nd minute.

The Germans then took the game to India's half with a string of penalty corners and were rewarded with their second goal when Grambusch placed his drag flick beyond custodian Sreejesh's outstretched right hand in the 36th minute.

FT: India draw their 1st game vs defending champions Germany after a well fought performance by the boys!#HCT2016 pic.twitter.com/Nj0r3XLGFd

With errors creeping into India's game, Germany were able to force penalty corners almost at will, but sprayed the shots wide to give the Indians some respite.

India came close to increasing the lead in a rare attack in the 52nd minute when S K Uthappa darted into the circle and the defenders made an aerial clearance, which should have earned India a penalty corner. But Mandeep, at close range, raised his stick to pick up the rebound and shot wide in desperation. As he had taken a try, the penalty corner was not awarded.

Germany were awarded the last of their nine penalty corners in the 57th minute, and that hit defender Pradeep Mor on the body and a penalty stroke was awarded. Gomoll made no mistake with his penalty stroke and India had to be content with a draw in their opening fixture.