With moments left to play in the final match vs China and the scores level at 1-1, Deepika Thakur found the winner for India in the 60th minute to hand her team the title 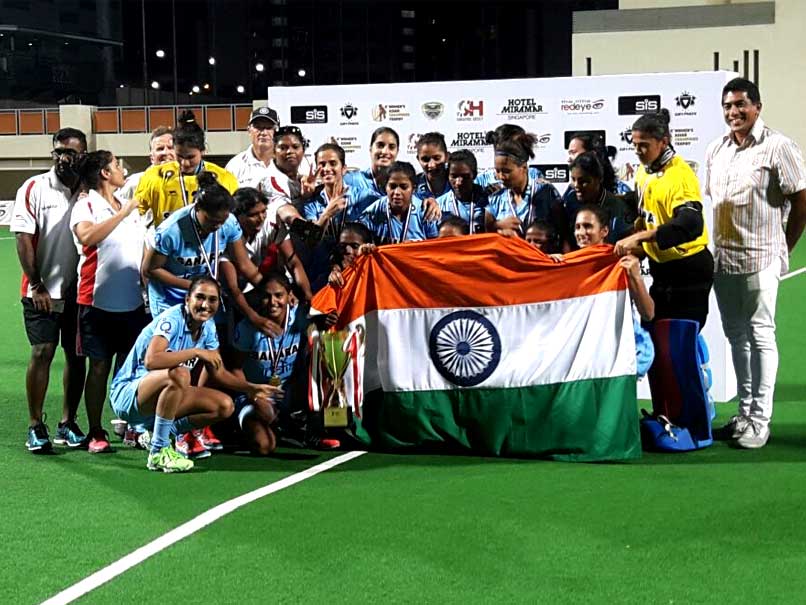 The Indian women's hockey team lifted its maiden Asian Champions Trophy after Deepika Thakur struck in the final minute to give her team a thrilling 2-1 win over China in the final here on Saturday.

Deepika slotted the rebound in from a penalty corner in the 60th minute of the game to give her team a memorable victory.

Earlier, Deep Grace Ekka converted a penalty corner to take India into the lead in the 13th minute before China equalised in the 44th minute through a field goal from Zhong Mengling.

The welcome result for the Indian women's team comes days after men beat Pakistan to reclaim the Asian Champions Trophy in Kuantan, Malaysia.

Congrats to our women’s hockey team for winning the Asian Champions Trophy 2016. It is a great moment for Indian hockey. @TheHockeyIndia

India's best finish in the Women's Asian Champions Trophy came in the last edition in 2013 when it finished runner-up to Japan. It had finished third in the inaugural edition in 2010.

Having learnt from their group stage encounter, India refused to let China take early control of the ball, closing them down high up the pitch, often intercepting their passes and constantly putting pressure by hunting in packs.

When in possession, the Indian eves held their nerve and passed the ball around neatly to penetrate China's circle.

This slightly different approach to their game compared to Friday helped them earn India's first PC of the game in the 13th minute.

An innovative set-piece saw Deep perfectly send the ball past the Chinese keeper for the early lead.

Going into the second quarter, India kept up the pressure by playing disciplined hockey, keeping their calm only to deny the Chinese a chance to equalise.

However, the third quarter saw China's Mengling Zhong penetrate the Indian circle to score a quick field goal. But the Indian eves were unrelenting and were playing the kind of hockey that had China on the backfoot.

China managed to earn their first PC of the match in the third quarter but failed to convert, sending the ball way off the baseline.

Though fortunes changed hands by the minute, neither team dropped the intensity going into the fourth quarter. For India, it was Rani who was acting like a lynchpin, attempting to penetrate the Chinese D to earn a PC and she found a chance with just minutes left before the final hooter went off.

Comments
Topics mentioned in this article
Hockey India Women
Get the latest updates on IPL 2021, IPL Points Table , IPL Schedule 2021 , live score . Like us on Facebook or follow us on Twitter for more sports updates. You can also download the NDTV Cricket app for Android or iOS.