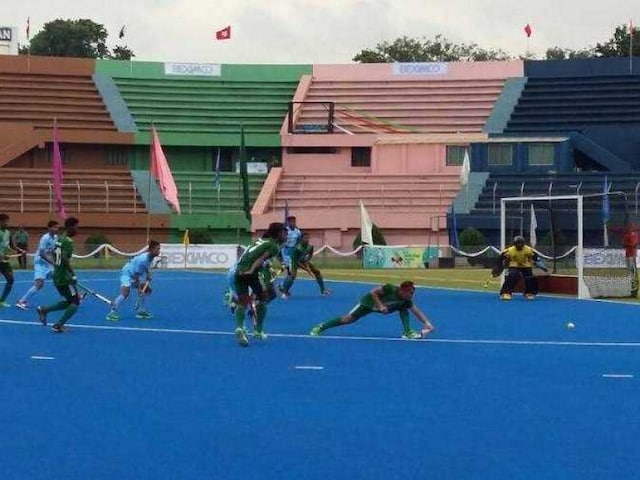 India lost 4-5 to Bangladesh in their U-18 Asia Cup opener.© Hockey India

Playing against the host team in front of a partisan crowd, India went down to Bangladesh 5-4 in the U-18 Asia Cup hockey opener on Saturday.

The hosts started off strongly pushing India back deep into defence and had their first penalty corner of the game in the third minute. From the PC, goalkeeper Pankaj Kumar Rajak effected a smart save, diving to his left to deny Bangladesh the lead.

The hosts kept the pressure up though and eventually took the lead via Ashraful Islam's PC in the 15th minute. Shocked at going down early, India started stringing together passes in their midfield and started taking control of the game, slowly turning the screws on Bangladesh's defence.

The pressure told in the 21st minute, as India won a PC and after an infringement in the circle were awarded a stroke. Dharminder Singh put it away to draw his team level. Five minutes later India had the lead, a superb counter attack finished off by Ibungo Singh Konjengbam.

Bangladesh weren't frazzled though and buoyed by the home support, earned a PC off a quick counter attack. Islam's dragflick left Rajak with no chance, as he scored his second of the game to restore parity. With the halftime hooter imminent, Bangladesh pushed forward in numbers and had two consecutive PCs in the dying minutes, both parried away by Rajak to ensure India went into half time level at 2-2.

Bangladesh took the lead almost immediately after half time, winning a PC in the 38th minute, which was converted by Islam to give them the lead. In a helter-skelter game, suddenly both teams were playing off the counter, exploiting large gaps created by high lying defences.

India equalised via a Hardik Singh goal, before Bangladesh scored their fourth-their first field goal of the match-to wrestle back a one-goal lead.

FT: India lose out narrowly to Bangladesh in a 9-goal thriller in their first match of the 4th Men's U-18 Asia Cup.#IndiaKaGame pic.twitter.com/SoCy9eg3wk

India took control of the game and had it all to do, spreading the ball around hoping to create an opportunity for the equaliser, while remaining cautious at the back. Their efforts paid off in the 53rd minute, Dilpreet Singh scoring the equaliser drawing them level at 4-4.

With 10 minutes to play Bangladesh won another PC and Islam who had caused problems for India's defence through the match did not let up scoring his fourth goal and restoring Bangladesh's advantage.

India rallied back and created several half chances, attacking the Bangladesh circle furiously, but the hosts held on to take the win.

Speaking after the game, coach BJ Kariappa said, "We conceded too many penalty corners today, and did not attack their dragflickers hard enough. We look to improve upon this and perform better in our next game against Oman."