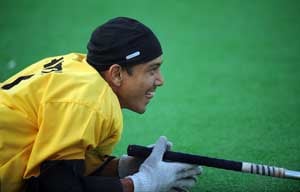 The marriage was solemnised at Hotel Park View this evening in the presence of a restricted number of guests, mainly consisting of family members, a few of his India team-mates and Hockey India officials.

The marriage was an arranged affair and the engagement was held just before the Olympic qualifiers earlier this year.

Geeta is 23 years old and is a graduate.

It is learnt that the goalkeeper decided to keep his marriage a low-key affair after India's disastrous campaign at the London Olympics, where the eight-time champions finished last in the 12-team men's hockey competition.

Originally hailing from Darjeeling, Bharat is now settled in Bangalore where he is working with the Canara Bank.

"After marriage I will take a break for 10-12 days and then join training. My present focus is the Senior National Men's Championship to be held in Bangalore from September 23 to October 2," Bharat said.

Comments
Topics mentioned in this article
Hockey India Cricket Team
Get the latest updates on ICC T20 Worldcup 2022 and CWG 2022 check out the Schedule, Live Score and Medals Tally. Like us on Facebook or follow us on Twitter for more sports updates. You can also download the NDTV Cricket app for Android or iOS.