The Sardar Singh-led Indian side will be in no mood to wait till November and would be desperate to secure their direct ticket to Hague with a win over South Korea on Sunday. 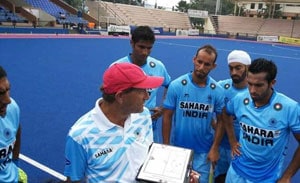 Their World Cup berth all but secured, a confident India would look to book a direct ticket to next year's mega-event by winning the ongoing ninth Asia Cup hockey tournament when they clash with defending champions South Korea, here on Sunday.

Both India and Malaysia have virtually qualified for the World Cup to be held at The Hague, Netherlands after South Korea shut the door on Pakistan with a narrow 2-1 win in the first semifinal.

Pakistan, record four time World Cup champions, will be missing the show-piece event for the first time since the inception of the tournament in 1971.

Korea having already qualified for the World Cup while Pakistan's passage to the quadrennial event was possible by winning the Asia Cup.

But their defeat has opened the door for India and Malaysia who will now just have to wait for the official confirmation from the International Hockey Federation (FIH) after the conclusion of the Oceania Cup in November.

But the Sardar Singh-led Indian side will be in no mood to wait till November and would be desperate to secure their direct ticket to Hague with a win over South Korea tomorrow.

Having finished a lowly a seventh in the last edition of the tournament in 2009, redemption will also be in the minds of the Indians when they take on Korea tomorrow.

Two-time champions India last won the Asia Cup in 2007 on home soil when Southern city of Chennai hosted the event.

And having defeated Korea 2-0 in the pool stages, the Indians would be brimming with confidence ahead of the summit clash.

India, who has so far looked the best side in the tournament, are unbeaten going into the final and they would look to keep their record intact tomorrow.

In the four matches they played so far in the tournament, India have conceded just one goal while pumped in as many as 21 goals against their opponents.

Interestingly, India's defence, considered as the perennial problem of the team, has been the unlikely hero in the tournament so far.

The backline comprising VR Raghunath, Rupinder Pal Singh, Kothajit Singh, Gurmail Singh and Birendra Lakra have stood like a wall and have gained confidence from the impressive form of the team's vice captain and goalkeeper PR Sreejesh behind them.

Against Malaysia in the semifinal, the Indian defence rose to the occasion and thwarted numerous scoring chances to deny any inroads to the hosts.

A significant air of confidence is also visible among Indian players in the tournament. Raghunath and Rupinder seemed to be relishing the extra responsibility as the duo looks intimidating and fearsome with the drag-flicks.

As always captain Sardar Singh holds the key in India's midfield under whose shadow youngsters like Manpreet Singh, Chinglensana Singh and S K Uthappa have blossomed.

India's young and inexperienced forward-line too has managed to live up to the expectations so far. 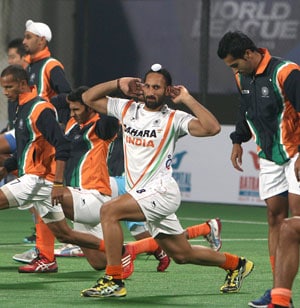 Thimmaiah. They have combined well to expose holes in the opposition's defence.

Young Mandeep, in particular, is in superb form and so far scored five goals in the tournament, including a fine field goal against Malaysia in yesterday's semifinal.

But the Indians need to draw a line between confidence and over-confidence as in Korea they take on a very dangerous opposition who showed their intentions clear against Pakistan yesterday.

"It's a new game. We will have to forget the results from the past. They don't count anymore. The fact that Korea won against Pakistan showed why they are here for. They are here to win the Asia Cup and they showed it by beating Pakistan," India's interim coach Roelant Oltmans said.

"It will be a very tough game. We will have to be aware about everything because Korea is a very dangerous side," he added

For Korea, revenge would high on agenda going into tomorrow's encounter. Having lost to India in the pool stages, the Koreans would be desperate to avenge their defeat and defend their title here.

As they did against Pakistan yesterday, the Koreans are expected to adopt a defensive approach and surprise their opponents with quick counter-attacks.

All in all, an exciting match is on the cards which will decide the best hockey team of Asia.

Comments
Topics mentioned in this article
Mandeep Singh Hockey Royal Challengers Bangalore Deccan Chargers Kings XI Punjab
Get the latest Cricket news, check out the India cricket schedule, Cricket live score . Like us on Facebook or follow us on Twitter for more sports updates. You can also download the NDTV Cricket app for Android or iOS.