India, after defeating Great Britain, will face Belgium in their third match of the FIH Champions Trophy 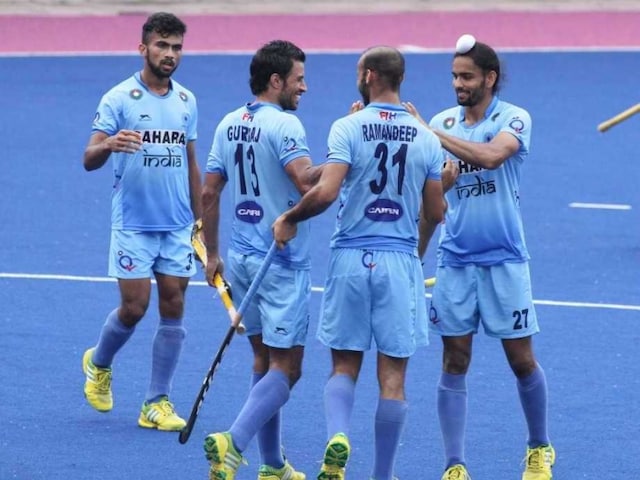 India have won one match and drawn one in the Champions Trophy so far.© NDTV

India, with a win over hosts Great Britain in their previous game and a formidable record against Belgium in Champions Trophy encounters, are exuding confidence going into Monday's match at the Lee Valley Hockey Centre here.

India enjoyed a good record in head-to-head matches against Belgium, but since 2011 the tide has turned in favour of the European rivals.

Called the Red Lions, the Belgian team has been on a winning spree against India since the final of the 2011 Champions Challenge in Johannesburg, a victory that earned them their first Champions Trophy qualification.

India's only success in eight matches since then have been the two Champions Trophy encounters in 2012 (Melbourne) and 2014 (Bhubaneswar).

On both occasions, the Indians pulled off upset victories over the fancied Belgians to make the semi-finals in the earlier format of the Champions Trophy, which has been abandoned this time as the event returned to its original six-nation event.

India's 2-1 victory over Great Britain on Sasturday and the 3-3 draw with Olympic champions Germany on Friday have given them four points from two matches, putting them at par on points with World champions Australia, who last night defeated South Korea 4-2 in a fast-paced encounter.

Australia had earlier played a goalless draw against Great Britain.

Belgium, ranked No. 5, are placed two spots above India in the current world rankings and both teams have brought some of the junior players to this tournament.

While India are without key player Sardar Singh, Belgium have felt the absence of crack striker Tom Boon in their two outings here.

Like India, Belgium too squandered a two-goal lead against Germany to be held 4-4, but it is the 0-2 loss in their opening outing against South Korea that has rankled them more. Wayward shooting by their strikers is worrying the Belgians.

While the Indian defence yesterday managed to keep the British strikers away from their goal, the strikers have been squandering chances.

Young striker Mandeep Singh could have sealed the fate of the match well before the hooter yesterday, but muffed two opportunities in the last quarter.

Once he swung and missed the ball when shaping for a crack at the goal and later allowed his foot to come in contact with the ball after getting a long ball at the top of the circle. On the second occasion, he had an open goal in front as Britain had taken their goalkeeper off in the closing stages.

"Belgium will be a good challenge and the boys will have to play well again to get a positive result," said Roelant Oltmans, the Indian team coach.

"We are playing well and growing in strength, but need to make more out of our chances. We did well to bounce back strongly in our last outing against Great Britain,' he added.

In 57 encounters against Belgium, India have won 37 times, while 10 matches ended in a draw. Out of Belgium's 10 wins over India, six have come since 2011, when they began a remarkable rise into world's top five nations.

India's two successes in these five years were the 1-0 win in the Champions Trophy at Melbourne and 4-2 in Bhubaneswar. Both these were quarterfinals of the respective Champions Trophy events. But thereafter, India had to be satisfied with the fourth spot as they failed to reproduce the winning show in the semifinals or bronze medal fixtures that followed.