Knowing fully well that winning the Asia Cup would guarantee a place in next year's World Cup, the Indian team indulged in a 'goal-fest' as they scored four apiece on either side of the break. 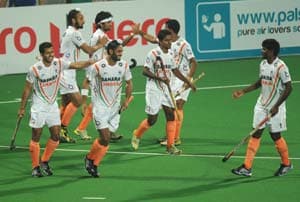 The Indian team indulged in a 'goalfest' as they scored four apiece on either side of the break.

Knowing fully well that winning the Asia Cup would guarantee a place in next year's World Cup at The Hague, Netherlands, the Indians meant business from the onset and concentrated mainly on building formations.

The Indians were expected to control the proceedings against Oman and they did exactly that as the play was mostly centred around the Oman half.

After starting on a rather casual note, the Indians soon tightened up their grip over Oman and mounted continuous raids.

In the opening half, majority of India's build ups came from the right flank with Ramandeep Singh and Malak Singh combining well.

But penalty corner conversion still seems to be a worry for India as they utilised just two out of the six that came their way in the entire duration of 70 minutes.

The Indians earned their first penalty corner as early as in the third minute but Rupinderpal's flick was saved by Oman goalkeeper Al Noufali Fahad Khamis Salmeen. But an opportunistic Mandeep scored from the resultant rebound to give India a 1-0 lead.

India doubled their lead in the 17th minute through an unmarked Ramandeep who scored after receiving a Malak assist from the right flank.

India earned a penalty in the 28th minute when Nithin Thimmaiah was brought down inside the Oman circle and V R Raghunath made no mistake from the spot to make the scoreline 3-0 in favour of the Indians.

India could have scored another in the next minute but Rupinder's reverse hit from inside the 'D' was saved by the Oman custodian.

Just a minute from the breather, India increased their lead through Rupinder who converted the team's fifth penalty corner with a high flick that crashed on to the top right of the Oman goal.

It was no different after the change of ends as India continued their domination over Oman.

It took India just five minutes into the second half to find the back of the net, Mandeep scored his second goal of the day with a perfect reverse flick after being fed by a cross from Chinglensana Singh.

Mandeep was again at the thick of things as four minutes later he scored histhird goal of the day after receiving a pass from Ramandeep.

Three minutes later, it was Malak's turn to register his name in the score-sheet after Dharamvir intial shot was saved by the Oman goalkeeper.

A diving Uthappa rounded off the tally a minute from the hooter by tapping home Malak's cross from the right flank.

After a rest day tomorrow, India will play title holders Korea in the second Pool B match on August 26.

Comments
Topics mentioned in this article
Royal Challengers Bangalore Deccan Chargers Kings XI Punjab Hockey Mandeep Singh
Get the latest updates on IPL 2020, check out the IPL Schedule for 2020 and Indian Premier League (IPL) Cricket live score . Like us on Facebook or follow us on Twitter for more sports updates. You can also download the NDTV Cricket app for Android or iOS.