Netherlands head coach Paul Vanass says his team is using the Hockey World League Final in Delhi as preparation for the FIH World Cup later this year at home. 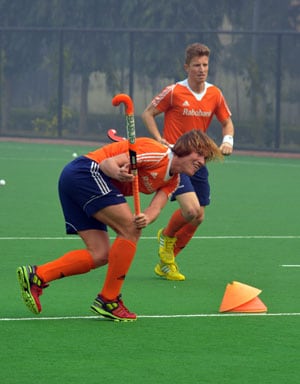 Netherlands head coach Paul Vanass is aiming for the summit clash of the Hockey World League Final to be held here at the Major Dhyan Chand National Stadium January 10-18. The team practised here on Tuesday ahead of their opening clash against Argentina on January 10, after which Vanass spoke to the media.

"These are the top eight teams of the world and there will be no easy games. It will be interesting to see where do we stand post this tournament as from here we start preparing for the World Cup. The aim here is to qualify for the finals. Amongst other countries, India is a strong team and we expect them to make it to the semis," Vanass said.

Skipper Robert van der Horst said this tournament is like a final Test ahead of the FIH World Cup to be played in their home country from May 31 to June 15.

"Our pool is tough with Australia, Belgium and Argentina. This tournament is like a final test for us before we enter the World Cup which is scheduled to take place in our country. We hope to be on the right track post this tournament," said van der Horst.

Comments
Topics mentioned in this article
Portugal France India Cricket Team Netherlands Mexico Belarus Canada Hockey
Get the latest updates on India vs Australia Series, check out the India vs Australia Schedule for 2020-21 and Ind vs Aus live score . Like us on Facebook or follow us on Twitter for more sports updates. You can also download the NDTV Cricket app for Android or iOS.