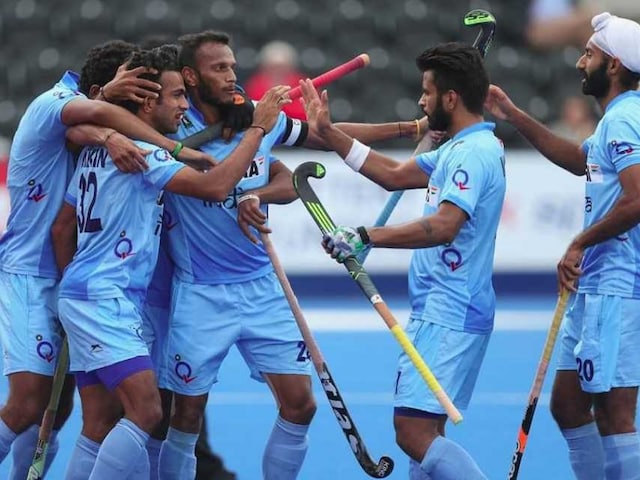 India bounced back after their 0-4 loss to Germany with a 2-1 win over Ireland in the six nation hockey tournament (Image Credit: FIH/Getty Images)

A defiant India managed to hold back minnows Ireland 2-1 in the second match of the Six Nation Hockey Tournament here on Tuesday.

After a below-par show in the opening game against Olympic gold medallists Germany, India put on a fight through efforts from forward Talwinder Singh and skipper Sardar Singh in the 22nd and 32nd minutes respectively while midfielder Kyle Good managed the solitary goal for Ireland.

In the first quarter, Ireland began the proceedings on a promising note to take a 1-0 lead with midfielder Kyle Good opening the scoring in the very fourth minute of the match. After the drubbing from Germany, India looked rusty but did not allow any more scoring opportunities.

India bounced back well in the second quarter, creating chances and with much improved defence to get the equaliser in the 22nd minute. Forward Talwinder Singh made no mistake in converting a penalty corner chance to make it 1-1 going into half time.

Coming back from the break, India were on the aggressive as a clever deflection from skipper Sardar Singh gave the team the much-needed lead in the 32nd minute. Four minutes later, India missed another chance of scoring after failing to convert a penalty corner. India once again failed to put the ball inside the net in the 38th minute to go to the fourth quarter 2-1.

The final quarter witnessed a tough contest from either side with the Irish giving a tough fight. India tried their best to extend the lead but failed to cross the Irish defence as the match ended 2-1 in favour of the Indians.

Speaking after the game India's chief coach Roelant Oltmans said, "We started off slow today, much like yesterday, but quickly came back and found our rhythm. The good thing is we played strongly once we took the lead and had several chances to secure the game, an area we need to work on."