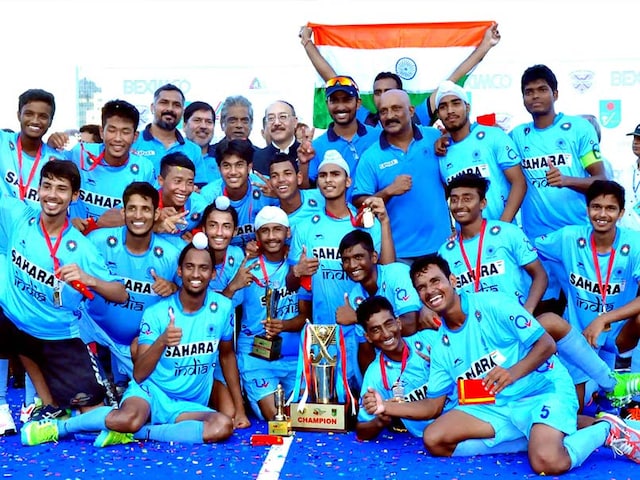 The victorious Indian team with the U-18 Men's Asia Cup Hockey trophy.© NDTV

A last minute strike gave India a 5-4 victory in their final game against hosts Bangladesh and helped them lift the U-18 Men's Asia Cup here on Friday.

In what was almost a replay of the opening game, the two teams treated the fans to a thrilling nine-goal encounter with India emerging triumphant in the end to be crowned the champions.

India got off to a quick start and kept the ball in their possession as they searched for an opening to penetrate the rival circle.

Their approach paid off as they won their first Penalty Corner in the 6th minute itself. After an initial error, India recovered and improvised to take a shot on goal, but the attempt went in vain.

While India held the possession, Bangladesh waited for the counter. From a counter, the home team won a PC, and after the initial save by Pankaj Kumar Rajak, M Roman Sarkar netted the ball to give the hosts the lead.

India were quick to score the equaliser through Shivam Anand, who picked up a pass on the edge of the circle and cut back in, running past two Bangladesh defenders to execute a perfect reverse flick into the net.

India earned one more PC but yet another error denied them a goal.

From a counter Bangladesh ran through the midfield, before a cross from the left found Mohammad Mohsin, who deflected the ball to give the hosts a lead again to go into the break 2-1 up.

After the break, India levelled the scores via Hardik Singh's PC before Dilpreet Singh netted the ball to hand the visiting team a 3-1 lead.

In a topsy turvy game, almost a replay of their opening encounter, Bangladesh equalised with Mohammed Ashraful Islam scoring a goal in the 60th minute.

But Ibungo Singh Konjengbam fired India back in the front again.

Bangladesh also fought back and Mahabub Hossain levelled the scores after a quick counter in the 64th minute.

With the scores tied 4-4 and the threat of a shootout looming, a quick counter saw Abhishek in the box and his deflection guided India to the title with just seconds to the hooter.