The first half ended 0-0 after which Raghunath opened the scoring in the 55th minute before SV Sunil ensured India victory three minutes before time. 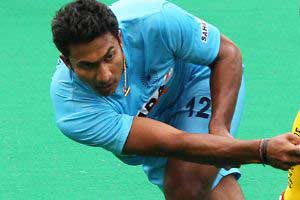 As part of their preparation for the FIH world league championship semifinals, Indian men warmed up with a 2-0 victory against the Netherlands in Rotterdam on Tuesday.

India's vice-captain VR Raghunath and striker SV Sunil scored a goal each after the first half ended 0-0. Raghunath opened the scoring in the 55th minute before Sunil ensured India victory three minutes before time.

India will play another match against the hosts on Thursday. The third round (semi-finals) of the FIH Hockey World League will be held in Rotterdam from June 13-23.

Comments
Topics mentioned in this article
India Cricket Team Hockey Belarus Portugal Netherlands France Mexico Canada
Get the latest updates on ICC T20 Worldcup 2022 and CWG 2022 check out the Schedule, Live Score and Medals Tally. Like us on Facebook or follow us on Twitter for more sports updates. You can also download the NDTV Cricket app for Android or iOS.