Sardar Singh Indian coach Terry Walsh is dissapointed after two straight losses. © AFP India were the better side in the game against England but Terry Walsh said that in reality they have no points and need to work towards opening their account in their next game against Spain on Thursday. 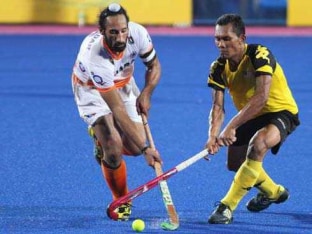 India's chief hockey coach Terry Walsh was left dejected after the team again conceded a late goal to go down 1-2 to England for their second consecutive defeat in the FIH Hockey World Cup on Monday.

Though India were the better of the two teams, he said the reality was they are yet to open the account.

"I thought both sets of guys played well. The reality is we have no points from two matches despite playing some really good hockey," said Walsh.

India had also lost their opening encounter to Belgium 2-3 in the last minute.

Walsh said India can take heart from the fact that they are losing narrowly to better sides.

"Both teams we have played are ranked above us, but we have come close on both occasions. If you take a step back you can see that we are making progress. We are in this environment and we are playing the top teams, so we will benefit from that. The level we are playing at is better than where we have been," he said.