India take on South Korea in the 9th place play-off tie on Saturday. 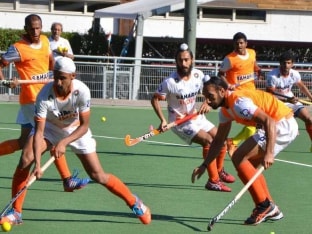 Dejected at failing to improve upon their eight-place finish of the last edition, India have a lot at stake in the ninth-position playoff against South Korea in the men's hockey World Cup here. India not only seek revenge for their 3-4 loss against Korea in the 2013 Asia Cup final but both the teams' also have the Asian Games on the radar when they face off on Saturday.

India were the last of reserve teams to clinch a spot among the 12-nation lineup for the World Cup, where four-time champions Pakistan were missing from the first time in the tournament's history. Three months ahead of the Asian Games in Incheon, India are eager to put aside their disappointment of a lacklustre show in this World Cup and seek to produce their best game against South Korea, the continental champions.

Coach Terry Walsh says international sport provides no space for brooding at past results. "Whatever the disappointment of the previous outing, you need to lift yourself for the next game," says Walsh, trying to motivate his players to produce their best against the Asian rivals.

A good result against South Korea will lift the morale of the Indian team in the year that will see these two nations meeting again in the Asian Games, which will be the qualifying event for the 2016 Olympic in Rio de Janeiro.

The India-South Korea encounter will decide the rankings among Asian teams. Malaysia, the third team from Asia in the men's competition, has finished in the 12th position after losing the playoff for the 11th spot to South Africa. Other than the fact that India had a victory -- over Malaysia -- to show for in their five preliminary league outings, the World Cup campaigns of both India and South Korea ran on similar lines.

Both teams suffered defeats in their initial two games to late match-winners conceded by their shaky defence.

India suffered a 0-4 loss against defending champions Australia in their last league fixture of the World Cup, finishing fifth in Group A.

India finished with four points through the victory over Malaysia and a draw against Spain. South Korea finished fifth in Group B after suffering a 1-6 loss against 2012 Olympic champions Germany in their last outing.

The Koreans crashed to four defeats and managed to earn just one point through a draw with South Africa. A four-day gap before the playoff against South Korea has given the team time to work on the strategies that failed to click in the tournament.

The Indian team coaches have been consistently working on the team's trouble-some areas, primary among them being the penalty corners. India has managed just 12 penalty corners in five matches, and they have failed to convert any.

It is an area bothering coach Walsh, who is wondering the reason that the Indian players were not able to execute the penalty corner strategy that has been extensively practised. "The penalty corners continue to be an issue with us, and the team's been working on it," said Walsh.

An Indian victory over South Korea tomorrow will not just avenge the Asia Cup defeat to South Korea, it will also ensure that India end just one position below the 2010 World Cup.