With 12 points from four games, an unbeaten Australian side zoomed into the semis of the hockey World Cup in Hague, Netherlands.

Defending champions Australia became the first team to ensure passage into the semifinals of the hockey World Cup with a 5-0 hammering of England here today, giving them a maximum 12 points from four matches in Group A. 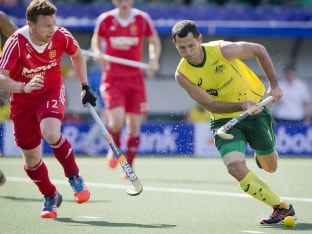 England, with seven points from four outings, are still in contention for the semifinals, but must win their last league fixture against Belgium, who are on nine points after a 5-2 victory over Spain.

India are in the fourth position with four points, followed by Spain on two and Malaysia on zero. Australia had five different players scoring a goal each against England.

Making entries on the scoresheet were Matt Ghodes, who opened the account in the first minute, Liam de Young, Jamie Dwyer, Kieran Govers and Aran Zalewski.

Belgium raced to a five-goal lead against Spain with goals being scored by Tanguy Cosyns (two), Alexandre de Saedeleer, Emmanuel Stockbroekx and John-John Dohmen. As the Belgians relaxed a bit, Spain managed to salvage some pride through two late goals from Eduard Tubau and captain Santi Frexia.

Sponsored by Vuukle
Comments
Topics mentioned in this article
Sibonelo Cyril Mthimkhulu Nick Wright Hockey
Get the latest updates on Fifa Worldcup 2022 and check out  Fifa World Cup Schedule, Stats and Live Cricket Score. Like us on Facebook or follow us on Twitter for more sports updates. You can also download the NDTV Cricket app for Android or iOS.