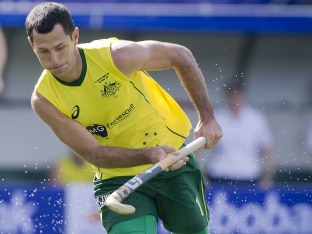 Before the men's final on Sunday, the same two nations will clash in the women's final tomorrow. Netherlands are the only nation to have won both the men and women's World Cups in the same year (in 1990) but in separate tournaments.

The only occasion when both the men and women's World Cups were held together was in 1998 at the Dutch city of Utrecht, where Netherlands won the men's title, but were beaten in the women's final.

Four of the Australian goals came through penalty corner conversions. Before Hayward came into the frame, Kieran Govers opened Australia's scoring with low penalty corner shot into the boards in the fourth minute.

Hayward then duly capitalised on the next penalty corner in the 22nd minute. Jacob Whetton picked up a long through ball inside the circle in the 33rd minute and sent a rising reverse hit past goalkeeper Juan Vivaldi to make it 3-0 at half-time. Chris Ciriello (49th minute) and Hayward (55th) converted successive penalty corners to give Australia a five-goal lead before Argentina pulled a goal back in the 58th minute through Gonzalo Piellat.

Chasing their fourth World Cup title, hosts Netherlands rode on a penalty corner conversion by Mike van der Weerden in the 31st minute to overcome the dogged England defence. Van der Weerden sent a drag flick, on Netherlands' second penalty corner, soaring into the net to the left of goalkeeper George Pinner, who warded off many raids by the rampant Dutch attack but was beaten this time.

The England goal had two narrow shaves when the ball rebounded off the bars after beating the defenders. In the 27th minute, Billy Bakker's rising reverse hit deflected off the cross-bar, while Rogier Hofman's flick rebounded into play after hitting the left post in the 48th minute.

England were constantly under pressure from the Dutch strikers, but managed to build some raids into the rival circle. Dutch custodian Jaap Stockmann, however, was not unduly troubled by the English shots at the goal.