The captains of the five franchises then took the oath to play in the spirit of the game. 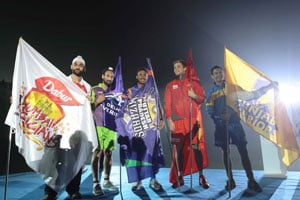 The inaugural Hockey India League (HIL), aimed at improving the state of the nation's national game, began with a dazzling opening ceremony here on Monday. However, the event at the Major Dhyan Chand National Stadium failed to attract a sizeable crowd.

The Indian Premier League (IPL) styled league kicked off with Delhi Wave Riders hosting Jaypee Punjab Warriors but a lot of action was in store before the start of the match.

A light and sound show started the action-packed ceremony and was followed by an enthralling dance performance from a Ukrainian couple.

The next act was liked the most by the spectators. The special effort saw a female performing acrobats in the air with the support of a helium balloon tied to a rope rooted on the ground.

The captains of the five franchises then took the oath to play in the spirit of the game.

HIL chairman Narinder Batra in his speech said: "We are confident that HIL will be grand success. We have strived hard to boost the image of our national game."

Next up was the HIL anthem composed by lyricist Prasoon Joshi, music director Aadesh Srivastava and singer Sukhwinder Singh.

The loudest roar came shortly after the ceremony and that was reserved for Sidhu, who Monday was named HIL's brand ambassador.

Comments
Topics mentioned in this article
Hockey India League Navjot Singh Bhagwantsingh Sidhu Hockey
Get the latest updates on ICC T20 Worldcup 2022 and CWG 2022 check out the Schedule, Live Score and Medals Tally. Like us on Facebook or follow us on Twitter for more sports updates. You can also download the NDTV Cricket app for Android or iOS.