The wintry Sunday could turn out to be the biggest day for these Under-21 Indian hockey players as they chase a dream of winning the mega event for the second time. 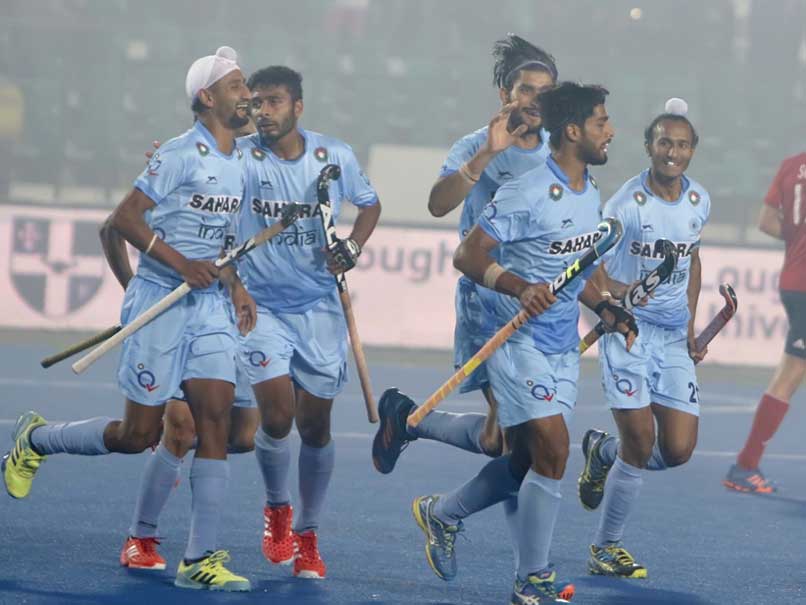 Assured of the silver medal, the Indians would now eye nothing less than the yellow metal.© Hockey India

A win away from rewriting history after a long gap of 15 years, Indian colts would look to showcase their best and leave nothing to chance when they take on Belgium in the summit showdown of the men's Junior Hockey World Cup here on Sunday.

The wintry Sunday could turn out to be the biggest day for these Under-21 Indian hockey players as they chase a dream of winning the mega event for the second time. India had earlier won the trophy way back in 2001 in Hobart, Australia. This is India's third entry into the final of the Junior World Cup after having finished runners-up in 1997.

Assured of the silver medal, the Indians would now eye nothing less than the yellow metal.

India's head coach Harendra Singh had told his players that it is now in their hands to decide the colour of the medal in what is seen as the "biggest game" of their career. "December 18 match is the biggest game for these boys. I would fold my hands and request them to show their character on that day. They need to decide which colour medal they want to see hanging in their necks," Harendra said after the semifinal win over Australia in a tough shootout on Friday.

Indian men's senior team chief coach Roelant Oltmans, who is the manager of the junior side here and is also an integral part of the coaching set-up, called on the Harjeet Singh-led side to show their "perfect" hockey.

"Now it's time for the perfect game and that we are going to show on Sunday. Our players will bring their best hockey in the most important match of the competition," Oltmans said.

Besides the momentum, the Indians would also rely on the crowd support. The city knows its hockey and 15,000 odd fans never gave up hope and kept on cheering when India trailed in the last two games against Spain and Australia.

After a lacklustre performance against Spain in the quarterfinals, Indian colts dished out their best hockey of the tournament so far against Australia but come tomorrow the hosts would aim to raise the bar further.

India's forwardline was impressive yesterday with Gurjant Singh and Mandeep Singh scoring two fantastic reverse hit goals, while the midfield was under the control of skipper Harjeet Singh.

India's defence has been erratic at times but Dipsan Tirkey and Harmanpreet Singh have managed to weather the storm when it mattered in the company of goalkeeper Vikas Dahiya, who was the hero of the win over Australia.

With tips from senior team captain and one of the finest goalkeepers of the world, PR Sreejesh, Dahiya showed he is a big match player and rose to the occasion in the semifinal, making a number of saves in the regulation time and then denying Matthew Bird and Lachlan Sharp in the shootout.

The only area of concern for India's coaching staff is the penalty corner conversion rate of dragflickers Harmanpreet and Varun Kumar.

All said and done, the Indians can't afford to take first-time finalists Belgium lightly. The European side has been making rapid progress in both the senior and junior levels over a period of time.

In fact, Belgium are the only side against whom the Indian colts had lost 2-4 in the four-nation tournament in Valencia, leading up to the ongoing tournament.

India head coach Harendra said they will have to utilise their opportunities against Belgium.

"Belgium are strong there is no doubt it. But at the same time against every opponent you get your opportunities. And also against Belgium we will get our opportunities," Harendra said.

"Belgium is a tough team and they have shown it by beating top sides like Holland, Germany, Argentina. It's a very strong side but we are also a very strong side." Belgium too have made a little bit of history of their own after having lost in the quarterfinals in the last edition of the tournament.

Coach Jeroen Baart knows the importance of the game for his wards.

"It's been a dream for the boys. They have been working towards it for two-and-a-half years. They have sacrificed a lot, drove a lot of miles to get into training and so on," Baart said.

"We still remember the disappointment of the last junior World Cup when we lost to France in the quarterfinals. We wrote a little bit of history in the sense that we are first time from the country to play in the semi-final of the Junior World Cup. That was something very special.

"Now the boys are really eager to get very far on the pitch in this tournament as in life and as a hockey player," he added.

Meanwhile, on the final day of competition, six-time champions Germany will take on Australia in the bronze medal clash.