The Indian hockey team is leaving for England on Sunday to compete in the Champions Trophy. The team's month-long tour will culminate in Valencia with the Six Nations Tournament. 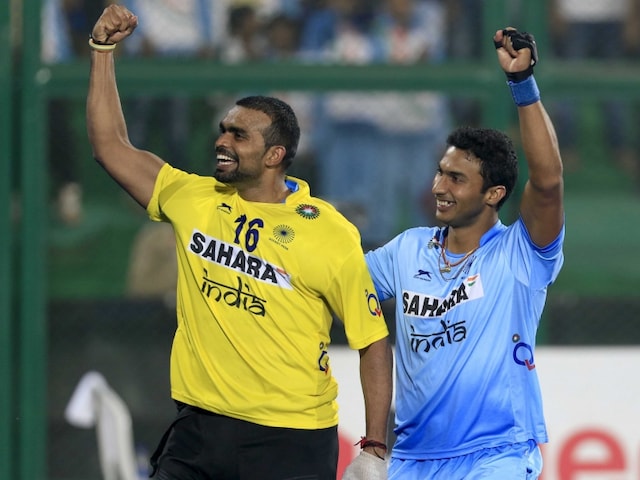 PR Sreejesh (L) will lead the Indian hockey team in the Champions Trophy in England.© NDTV

The Indian hockey team's stand-in captain and goalkeeper P R Sreejesh says the Champions Trophy in England and the following six-nation hockey tournament in Spain will give his side the opportunity to test players' mental strength ahead of the Rio Olympic Games.

The Indian hockey team is leaving for England on Sunday to compete in the Champions Trophy. The team's month-long tour will culminate in Valencia with the Six Nations Tournament.

"We are getting back-to-back matches in London and Spain and that's how the schedule will be like in Rio Olympics also. This will be a mental test for us as we play world's top four teams in London and we play the five teams we will face in Rio at the Six Nations Tournament. It will come down to how we succeed in executing the plans we have been working on at the training camp," Sreejesh said.

Playing high intensity matches almost two months prior to the Rio Olympics will not only give the team sufficient time to improve on certain aspects but will also ensure the team is mentally fresh for Rio, feels Sreejesh.

"Almost a month before the London Olympics, we were in Europe playing matches and directly went for the Olympics. This time, some of the senior players spoke to coach Roelant (Oltmans) after the New Zealand Tour and told him that we wanted to do things differently.

"We felt that being away for so long, playing 13-15 high intensity matches just before the Olympics made us exhausted mentally. But this time we will be fresh as we return early July, and we get a week's break before we rejoin the final national camp. The feeling of leaving from Delhi to the play the biggest event of our lives, with one billion people's wishes backing us will certainly boost our confidence and this works well psychologically for the team," he said.

As a stand-in captain for Sardar Singh, who has been rested for the Champions Trophy, Sreejesh said his priority will be to ensure the youngsters in the team stay motivated.

"As a youngster, playing against teams like Australia can add extra pressure. My aim as a captain will be to keep them high-spirited and bring them to that level. Right from the highest capped player for the team to the junior most in the team we all have responsibilities to fulfil and our realistic expectation will be to play consistently throughout the Champions Trophy," he said.

India will open their Champions Trophy campaign with a match against Germany on June 10.