Only Harmanpreet Singh was able to score in the penalty shootouts as SK Uthappa, SV Sunil and Surender Kumar all shot wide off the target, handing Australia a 3-1 victory. 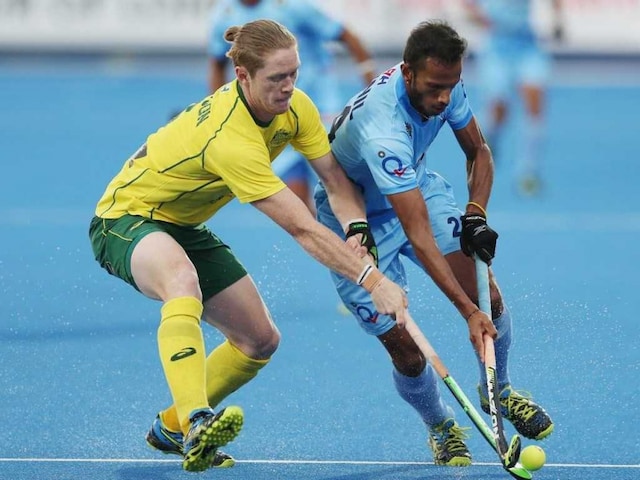 India muffed three tries in the title-deciding shootout to settle for a silver medal in the 36th Hero Champions Trophy as they lost the final 1-3 against World Champions Australia, in London on Friday.

Only Harmanpreet Singh was able to score in the shootout, while SK Uthappa, SV Sunil and Surender Kumar all shot wide off the target. Just four attempts were required from the two teams as Australia had gained a winning 3-1 lead.

There was plenty of drama in the shootout as Beale's shot was re-taken after he failed to score and sought a video review. The video umpire asked the shot to the taken again, leaving Indian coach Roelant Oltmans fuming on the sidelines.

At the end of the match India protested against the second succesful attempt awarded to Beale, delaying the final annoucement on the result of the match.

The officials assembled to decide on India's appeal as trophies were removed from the ground and the fans also left the stadium.

After dicussing the appeal for more than an hour, the jury declared that there was unintentional obstruction on part of Indian goalkeeper PR Sreejesh in the seventh second thus the re-take of the shot was justified.

India had won a bronze medal in the tournament way back in 1982 at Amsterdam.

Fancied Australia, looking for their 14th Champions Trophy title, faced a stiff fight from the Indians, who were playing their first final, but raised the level to come within striking distance of the title.

Australia wasted a penalty stroke in the second quarter and India failed to capitalise on their superiority in numbers when Australia were down to nine men for a short while in the third quarter.

India's lone previous medal in the Champions Trophy came 34 years ago, when they got a bronze at Amsterdam in 1982. India made the first foray into the circle in the ninth minute when Mandeep Singh broke in from the right flank and his shot rebounded off Australian goalkeeper Andrew Charter.

The ball went to Uthappa, who had the opportunity to have a measured crack at the goal, but sent a rushed reverse hit wide to the right.

In the next minute, Australia laid seize on the Indian citadel through four successive penalty corners, but goalkeeper Sreejesh brought off two fine saves. In the end, it was defender Surender Kumar who rushed out to block the penalty corner flick and the ball went out of the circle.

Talwinder Singh exchanged passed with Nikkin Thimmaiah and went into the circle from left, but he got into a very narrow angle and posed no danger as he shot straight into the goalkeeper's pads.

Australia got a penalty stroke three minutes into the second quarter when Glenn Turner's shot in a set-piece penalty corner try hit defender Pradeep Mor's foot. The umpire immediately blew for a penalty stroke, although the ball slowly trickled over the goalline.

Blake Govers failed to convert the penalty stroke as he flicked wide to the left and India survived the anxious moment.

FT: Heartbreak for India as the boys go down to the @Kookaburras in the shootout of the Hero #HCT2016! pic.twitter.com/SdNZUW05Fo

Indian defender Raghunath was quick to cover some ground when unmarked Govers got a ball on top of the Indian circle in the 24th minute. Raghunath deflected out the reverse hit.

Goalkeeper Sreejesh then made another good save on a penalty corner shot before India mounted a raid after a long time on a quick counter, but only for Akashdeep Singh to send a wayward pass from top of the rival circle.

Both teams were down to 10 men for a while in the second quarter when Indian defender Pradeep Mor and Australia's Daniel Beale were sent off following a stiff tackle.

Indian shooter Harmanpreet could not make the third Indian penalty corner count in the 29th minute and the title encounter remained goalless at half-time.

Raghunath's quick diagonal forward pass following an Australian penalty corner in the 37th minute saw India surge forward. The Indian strikers switched the ball around to find a leeway past the Australian defenders, who held their ground grimly.

India had a brief period of territorial dominance in the third quarter, mounting three raids into the circle and also forcing two penalty corners in as many minutes. The penalty corners did not pose a threat as the ball was not stopped on the first occasion and the feeble shot was easily cleared on the next one.

India failed to capitalise when they had an advantage in numbers as Australia were down to nine men in the third quarter with Matthew Swann and Trent Mitton were shown green cards in quick succession.

At the start of the fourth quarter, Akashdeep Singh took a reverse shot from top of the circle that got palmed away by the custodian. Australian defender Matt Dawson was sent off with a yellow card in the 50th minute for a deliberate foul on Indian winger Sunil and they had to play the last 10 minutes with 10 players.

Again, India failed to capitalise from an extra player on the pitch, and the advantage was negated with three minutes remaining as Indian player Thimmaiah also had a yellow card flashed at him.

Hero #HCT2016 the @TheHockeyIndia boys stay together while the decision is being made! #BestOfTheBest pic.twitter.com/BTSHz4wyms