India came close in the final but eventually went down 3-1 in the penalty shootouts to reigning World Champions Australia. This is India's maiden silver at the Champions Trophy. Catch highlights of India vs Australia here

2:39 hrs IST:Â India had to settle for the silver which is also their first in the history of the tournament. The last and only time India won a medal at the Champions Trophy was way back in 1982 at Amstelveen.

AUS 3-1 IND Surender Kumar misses and Australia have won the shootout 3-1 and win the #HCT2016 https://t.co/myAi0pKOs5

02:35 hrs IST: Nevertheless, it was a brilliant performance by the Indian hockey team, who at the same venue finished 12th and last at the Olympics.

Hero #HCT2016 the @TheHockeyIndia boys stay together while the decision is being made! #BestOfTheBest pic.twitter.com/BTSHz4wyms

02:32 hrs IST: That was a strong performance from India but a winner is a winner and Australia have clinched the gold

Great effort by @TheHockeyIndia ,went right down to the wire.Lost a great final in Penalty Shootout but won our hearts.
#HCT2016 #IndvsAus

02:26 hrs IST: Unbelievable! Sreejesh saves one with his pads!

02:23 hrs IST: Video referral says there was unintentional foul and Australia with a retake

02:16 hrs IST: Are the English fans also cheering for India there?

02:15 hrs IST:Â Nikkin gets a yellow for stick tackle and he is out for the rest of regulation time. Both teams now down to 10 men!

02:14 hrs IST: Is this final heading for penalty shoot-out?

02:10 hrs IST: The deflection is weak and wide and India defend it again! Unbelievable!

02:04 hrs IST: Stick check from Dawson and yellow for him. He is out for 10 minutes and Australia down to 10 minutes!

02:02 hrs IST: It is past 2 in the morning and for sure many Indians will still be awake to watch this match

01:53 hrs IST: Chance for India but the men in blue waste it too

01:50 hrs IST: Last time two years back in Bhubaneswar, India faced the same opponent in the same tournament but in the bronze medal playoff where Australia won 2-1.

01:47 hrs IST: Wow! Just noticed! India has support from none other than the Spurs!

CHAK DE INDIA!
All the best to the men in blue.#HCT2016 https://t.co/VdwpqEvAxy

01:45 hrs IST:Â The Indian defence has really been swashbuckling tonight. Another PC and another save! This is really incredible

01:42 hrs IST: The ball is more or less in the centre of the pitch right now

01:38 hrs IST: Will the Indian forwards so some magic now?

01:30 hrs IST: And that is half-time and the match is still goal-less!

01:28 hrs IST: Turned down and the match continues!

01:27 hrs IST: Was that stick check? India is asking for a referral!

01:24 hrs IST: Brilliant performance by India so far considering that they lost 4-2 in their last group stage match against the same team

01:19 hrs IST:Â Another PC! A variation and India save it yet again!

01:18 hrs IST: Another penalty corner taken by Australia and yet another save. Sreejesh is the hero for the Indian team.

01:16 hrs IST: Australia have had seven shots on the goal while India have had four!

01:15 hrs IST: Both teams have had four penetrations each in each other's D's

01:10 hrs IST: Disaster for Australia! The ball was pushed wide! They let a golden chance go!

01:07 hrs IST: And here starts the second quarter too

01:05 hrs IST: India get another PC chance but waste it again!

01:00 hrs IST: India save another and yet another PC! What is happening out there!

00:57 hrs IST: Uh oh penalty corner for Australia! India should save this or it will mean immense pressure

00:55 hrs IST: India has a chance! Ohhh that was close.. reverse flick from Uthappa but the ball goes wide

00:53 hrs IST: This is what India coach Roelant Oltmans also had to say before the start of the match.

00:47 hrs IST: The match has started and aggression right from the start!

00:44 hrs IST: The national games are being played in London!

00:39 hrs IST: The only other time India earned a medal in the tournament was way back in 1982 when the eight-time Olympic champions managed a bronze in Amstelveen.

00:36 hrs IST: In a few minutes, India will take on Australia for the gold medal. This is India's maiden appearance in a Champions Trophy final.

00:35 hrs IST: Hello and welcome to the final of the Champions Trophy. 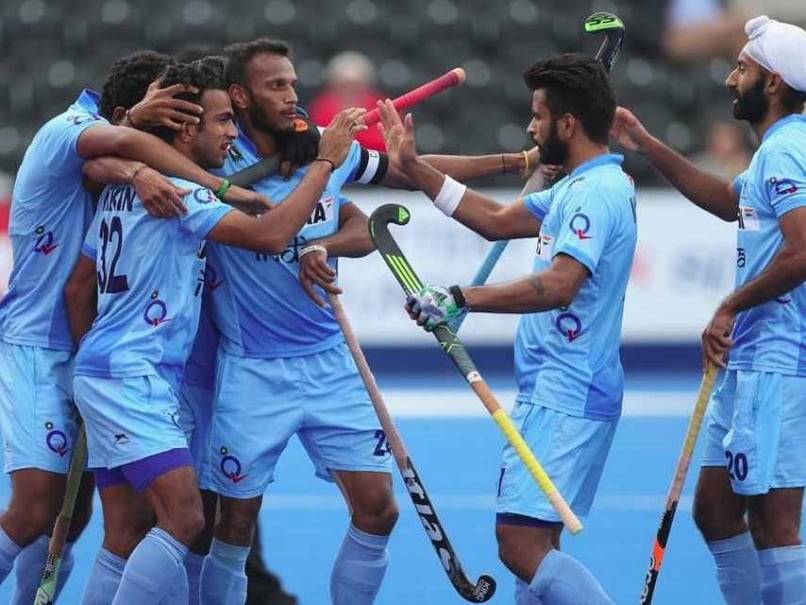 India will start as underdogs in the Champions Trophy Hockey final against an unbeaten Australian side. (Image Credit: FIH/Getty Images)

India will start underdogs against an unbeaten Australian side. India ran Australia close in their last league match on Thursday. India scored twice but lost out 4-2 in a match where PR Sreejesh's team had the guts to attack and score as well.

The perennial problem of conceding late goals sunk India against the marauding Aussies, especially Tristan White and Glenn Turner (three goals each). Friday night, India will be expected to play with more self-belief. India's best finish in this premier tournament has been a bronze in the 1982 edition in Amsterdam.

India have the personnel to score against any defence in the world. SV Sunil will lead India's attack with two young Sardars - Mandeep and Harjeet Singh - capable of opportunistic finishes. India also have a wealth of talent in the mid-field - Manpreet Singh and Danish Mujtaba.

It's all set for a big night for Indian hockey. Catch live hockey score of India vs Australia here.

Comments
Topics mentioned in this article
Hockey India Australia Live Blogs
Get the latest Cricket news, check out the India cricket schedule, Cricket live score . Like us on Facebook or follow us on Twitter for more sports updates. You can also download the NDTV Cricket app for Android or iOS.