Indian goalkeeper PR Sreejesh would be disappointed to concede two goals through his pads against the dominant Belgians, resulting in India's first loss in three outings of the ongoing Champions Trophy 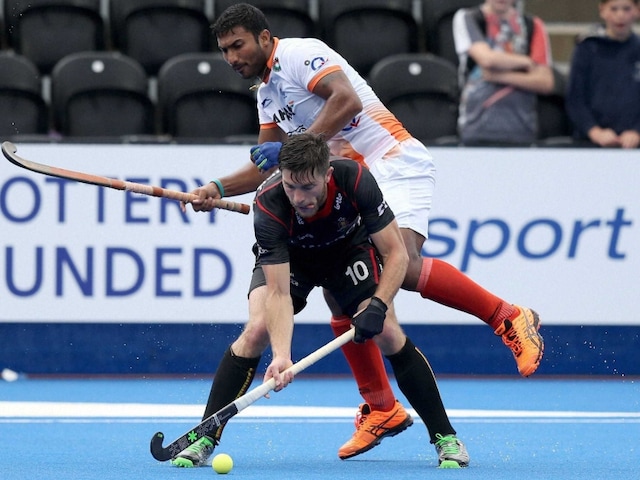 Belgium's Cedric Charlier (front) and India's Raghunath Vokkaliga battle for the ball on day three of the Champions Trophy at the Queen Elizabeth Olympic Park in London on Monday.© PTI

Indian captain PR Sreejesh's lacklustre show under the bar saw the team succumb to a 1-2 defeat by Belgium in the 36th Hero Champions Trophy at the Lee Valley Hockey Centre on Monday.

PR Sreejesh would be disappointed to concede two goals through his pads against the dominant Belgians, resulting in India's first loss in three outings of the ongoing Champions Trophy.

Alexander Hendrickx converted a penalty corner in the 25th minute and India equalised through Devender Walmiki five minutes later, but Jerome Truyens won the day for the Belgians through his field goal in the 44th.

This loss leaves India on four points from three outings. They next play South Korea on Tuesday.

This was the first win for Belgium in three outings. They join India and hosts Great Britain on four points each from three matches.

Britain on Monday outplayed South Korea 4-1 for their first win in the tournament, while World champions Australia consolidated their position atop the standings with a 4-3 victory over Germany. Australia are now on seven points, while Germany are at the bottom of the standings with just two points.

South Korea have logged three points in as many games. The India-Belgium match began with the Red Lions forcing a penalty corner in the very first minute, but Manpreet Singh saved a soaring shot to avert danger.

In the very next minute, Indian strikers made their way into the rival circle for the first time when Akashdeep Singh and Mandeep Singh moved in exchanging passes, but Mandeep then lost control of the ball.

Belgium came close to scoring in the 17th minute but Indian defender Kothajit Singh moved to his right to intercept a goal-bearing shot after goalkeeper Sreejesh had left his charge to rush out and block the Belgian striker.

Indians conceded a number of soft penalty corners and Belgium took the lead on their third penalty corner through Alexander Hendrickx, whose low shot went into the goal off goalkeeper Sreejesh's pads in the 25th minute.

The ball trickled over the goalline between Sreejesh's pads. Trailing for first time in this tournament, India got an equalizer in the30th minute when Devender Walmiki capitalized on a rebound from goalkeeper Vincent Vanash.

Walmiki sent a stinging flash shot from top of the circle that soared into the roof of the net, leaving the custodian a mere spectator. Belgium shooters had featured in five penalty corners before India earned one in the 32nd minute due to Sunil being obstructed by Hendrickx from going into the circle. V.R. Raghunath's penalty corner flick was saved on the goalline by Florent van Aubel.

Raghunath's second penalty corner shot, two minutes later, was deflected out by the goalkeeper. Belgium then had an extended period of domination, during which they earned three penalty corners in the space of four minutes. Belgium regained the lead through Jerome Truyens's 44th minute strike in open play.

Picking up a ball from Simon Gougnard inside the circle, Truyens beat Indian custodian Sreejesh with a deft flick. Sreejesh was dejected at having allowed the ball to go through his pads from a narrow angle.

India's few efforts to secure an equaliser did not possess the thrust to break past the sound Belgian defence. India took off their goalkeeper in the 69th minute to push an extra striker into the field, but it was already too late.