While Australia blanked Spain 2-0, France rallied to eke out a laborious 3-2 win over Argentina. 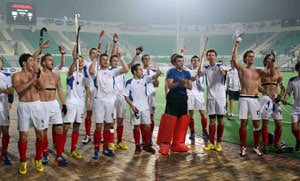 Australia and France made the quarterfinals of the Hero FIH Junior Men's World Cup after registering contrasting victories in their respective Pool B matches on Sunday at the Major Dhyan Chand National Stadium here.

While Australia blanked Spain 2-0, France rallied to eke out a laborious 3-2 win over Argentina.

Australia started on an attacking note from the initial whistle and were all over the Spanish circle but they somehow failed to produced desired results, even as they got a series of penalty-corners.

Spain managed to contain the Aussies and the break was reached on a goalless score.

Australia finally managed to scored in the 38th minute when Beale found the ball in a messy scramble in the circle after Spanish goalkeeper Mario Fernandez Garin stopped three shots in quick succession from close range.

Spain also had a chance on the next action on a penalty-corner but goalkeeper Andrew Butturini did a good job.

The Aussies had most of ball possession and Wotherspoon scored in the 63rd minute to give a comfortable two-goal cushion to the Kookaburras.

Spain had a desperate final surge but they failed to net the ball. With two losses in as many matches, they are already out of contention for a berth in the quarters.

In the other Pool B match, Pieter Van Straaten, Theophile Ponthieu and Jean-Laurent Kieffer scored for France, while Estanislao Perez Pesado and Gonzalo Peillat hit the board for Argentina.

It was fast and furious battle, which was going at breakneck speed from one end to the other.

France had a chance on penalty-corner first but they scrambled it, and Argentina scored on a swift counter-attack that found Estanislao Perez Pesado scoring the goal in the 20th minute.

France came back in the 25th minute when Pieter Van Straaten netted the ball. They then quickly took the lead as Theophile Ponthieu scored in the 31st minute.

But Argentina came back on the buzzer with a penalty-stroke by Gonzalo Peillat, sending the two teams 2-2 into the break.

In the second half also the pace of play remained very high.

Jean-Laurent Kieffer gave France the lead in the 48th minute and the French managed to cling to their narrow lead, earning their second win in two matches and a quarterfinal berth.

Comments
Topics mentioned in this article
Hockey France Romania Greece Argentina Spain Lyon Australia Cricket Team Costa Rica
Get the latest updates on IPL 2020, check out the IPL Schedule for 2020 and Indian Premier League (IPL) Cricket live score . Like us on Facebook or follow us on Twitter for more sports updates. You can also download the NDTV Cricket app for Android or iOS.