Indian hockey team will play lowly China on Tuesday before squaring up against the home team on Wednesday. 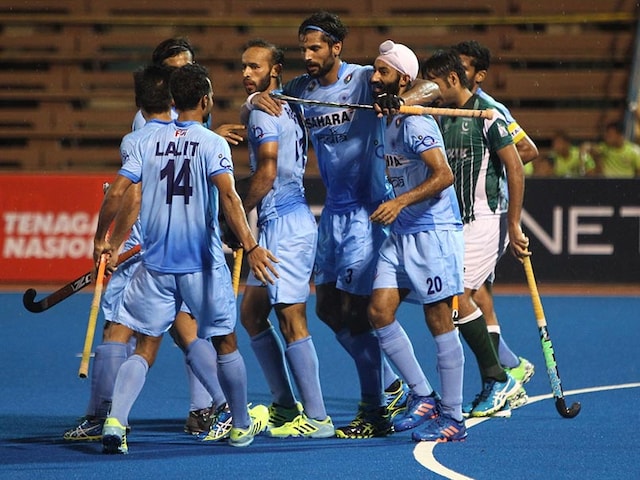 The victory over Pakistan has reinvigorated the Indian hockey team.© Hockey India

On a high after their morale-boosting win over arch-rivals Pakistan, India now eye wins against China and hosts Malaysia on successive days to finish on top of the round-robin league stage of the fourth Asian Champions Trophy hockey tournament.

India will play lowly China on Tuesday before squaring up against the home team on Wednesday.

The runaway 10-2 victory against Japan and the 3-2 win in yesterday's intense sub-continental contest against arch-rivals Pakistan has kept top-ranked India on course for the leading spot in the round-robin league, which could ensure them a favorable semifinal fixture.

But the draw against South Korea means India are two points behind Malaysia, who have gathered the maximum nine points from three outings.

Defending champions Pakistan are still on three points after suffering two losses, but will now go into two easy outings against Japan and China.

The victory over Pakistan has reinvigorated the Indian team that was stunned by the spirited show from South Korea the previous day, but team coach Roelant Oltmans says the boys need to improve on yesterday's fine show.

"We were much stronger than Pakistan yesterday, but we need to raise our game further. We can improve on this performance," says Oltmans.

Missing some key players who are recuperating from injuries, coach Oltmans says the return to competitive hockey after the post-Olympic break has provided opportunity to several youngsters to showcase their skills.

But he was not very happy with the errors committed in the defence that allowed space for Pakistani strikers to have cracks at the Indian goal.

"Our defence made a few mistakes in the second half yesterday. Pakistan were able to spot and capitalise on them to score two goals," said Oltmans, emphasising the need for India to cut out errors in their own zone.

The two Pakistan goals came in the space of nine minutes when the game resumed after half-time, enabling them to neutralise India's early lead and then and surging 2-1 ahead. But India possessed enough firepower to score two more goals and regain the initiative, which seemed to have been the feature of this encounter.

The coach wants his strikers to make their presence in the rival territory count and earn penalty corners.

"We need to have more penalty corners," he said. "Make no mistake, China can give a tough contest," said Oltmans of India's next rivals in the tournament tomorrow, before taking upon hosts Malaysia on Wednesday.

Coaches have learnt not to take China's hockey team lightly since they pulled off a shock win over India in the 2006 Asian Games and went on to clinch the silver medal.

That 2006 appearance in the Asian Games final remains the best performance for the Chinese men's team.

Malaysia's three victories on the trot have put them at the top of the league standings with nine points.

Bronze medalists in all previous three editions of the Asian Champions Trophy, Malaysia will be eager to add more points to their tally to take the top place in the preliminary league.