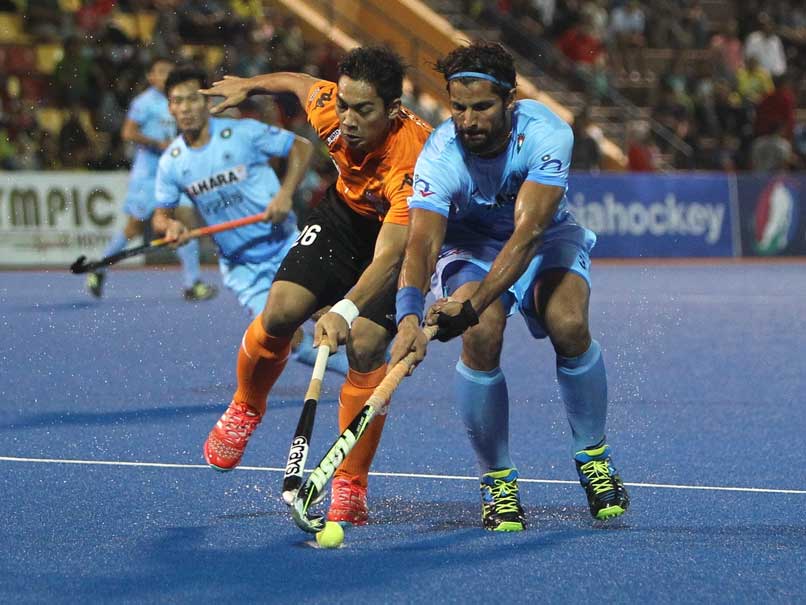 Opening the scoring in the 12th minute, Rupinder saw Malaysia equalise through Razie Rahim's drag flick in the 18th minute, but got into the goal-scoring act again two minutes from the end to clinch India a win in the crucial outing and top the league standings.

India survived some anxious moments as hosts Malaysia posed a serious challenge and had their citadel under pressure in the second half and even got a penalty corner in the dying seconds, but the defenders held their ground.

Rounding off their five outings with four wins and a draw, India topped the round-robin league standings with 13 points and now await the results of the last couple of games on Thursday to find out who they play in semi-final.

Indian captain PR Sreejesh was rested for another game to help recovery from his foot injury, giving the chance to reserve goalkeeper Akash Chikte to play this important match. Chikte justified the faith reposed in him and brought off some fine saves.

Starting with a couple of brisk raids, India forced their first penalty corner in the third minute, but Rupinder's rising drag-flick was deflected out by a defender's stick.

Ace Malaysian striker Faizal Saari had a view of the Indian goal in the sixth minute, but shot wide trying to find an angle past the goalkeeper and under pressure of time from the Indian defenders.

Rupinder put India into the lead in the 12th minute off their second penalty corner, when he slammed the rebound into the net from close range.

His initial drag-flick went off a defender's stick and hit the cross-bar before bouncing back to Rupinder, who had moved up several steps.

Nikkin Thimmaiah could have stretched India's lead two minutes later, but his deflected was saved by custodian Kumar Subramaniam, who played a fine game for Malaysia under the bar by effecting numerous saves.

India had another chance to score in the 17th minute when Akashdeep Singh drew the goalkeeper out and squared the ball to Yusuf Affan, who had an open goal in front but could execute a snap shot. Affan took a short while to seize control of the ball and then shot high over the crossbar.

Malaysia's efforts as quick counter-attacks earned them the first penalty corner in the 18th minute and Razie Rahim produced the equaliser with a stinging shot that went shoulder high into the net.

Experienced shooter Razie had opened the angle with a step forward to his right and the measured shot was not to be denied.

Malaysia came close to scoring again eight minutes later when diving Joel van Huizen defelected a cross by Shahril Saabah from the right flank, but the Indian goalkeeper exhibited his good reflexes by covering for the shot and blocking it with his body.

In the first minute after half-time, Ramandeep Singh got a lone top of the ball on the right flank and dribbled to the circle. He had only the goalkeeper in front and his marker-defender in chase, but lost control of the ball and the feeble shot went awry.

Soon after, it was the Indian goal that was in danger as Firhan Ashari intercepted a flank-changing square pass from defender Rupinder. Firhan quickly moved up and into the scoring zone, but he did not pass the ball to the other striker in the circle and sent a wayward shot wide.

Malaysian goalkeeper leapt to his left to slap away Rupinder's penalty corner shot in the 37th minute bedfore the hosts enjoyed a period of sustained pressure in which they had a couple of cracks at the Indian goal and also forced two penalty corners in the space of three minutes.

The Indian goalkeeper came into the picture and brought off two fine saves. India had to play the last 10 minutes with 10 players after Surender Kumar was sent off.

Malaysia's brisk attacks were posing danger to the rival citadel when India earned their fourth penalty corner that Rupinder converted with a rasping drag-flick into the roof of the cage.