India last won the Women's Asia Cup in 2004 when the event took place in New Delhi. The team remained unbeaten in the 2017 tournament, scoring 28 goals and conceding five. 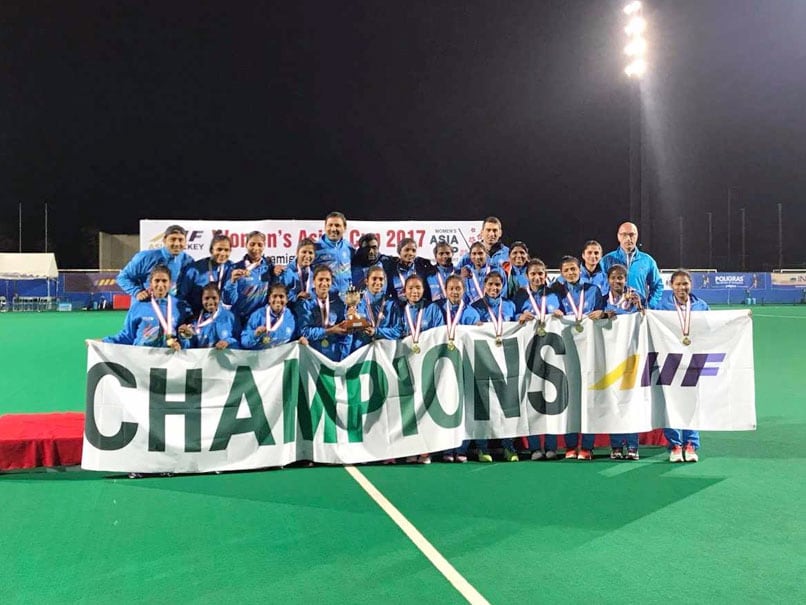 Hockey India on Monday announced a cash award of Rs 1 lakh each to the 18-member squad which won the 2017 Asia Cup in Kakamigahara, Japan. India defeated China 5-4 in the shootout in the final on Sunday and thus secured a World Cup berth in the process. Coach Harendra Singh will also get Rs 1 lakh and members of the support staff Rs 50,000 each. India last won the Women's Asia Cup in 2004 when the event took place in New Delhi. The team remained unbeaten in the tournament, scoring 28 goals and conceding five.

"This is truly a commendable achievement by the Indian team, bringing back the Asia Cup after 13 years. They have shown great spirit and determination to win this tournament and have rightfully qualified for the World Cup next year as Continental Champions," said Mushtaque Ahmad, Hockey India secretary general.

"We are all extremely happy that we won the Asia Cup and have earned the qualification for next year's World Cup on merit," said skipper Rani after the victory.

The team broke a 13-year-old jinx when Rani scored the final goal and goalkeeper Savita foiled an attempt from the rivals to ensure a 5-4 win.

"We had a lot of young players in the team who showed great spirit in playing on such a big platform. The team gave a good fight to China and China too played equally well today and the match went into a penalty shootout.

"It was a high-level competition and we did not drop our level at any point in the game. Savita made a brilliant save in sudden death and I am happy I could convert that goal in sudden death." She said the win has boosted the team's confidence ahead of the 2018 Commonwealth and Asian Games.

"We would like to especially thank Hockey India and SAI (Sports Authority of India) for their continued support and ensuring we get the best facilities. Hopefully, we will carry this confidence and motivation into the Commonwealth Games and Asian Games."

India last played in the World Cup in 2010 as they failed to qualify for the 2014 edition. Talking about the shootout, Rani revealed that preparing for tense situations helped the team pull through.