The Indian team, which has remained unbeaten with convincing victories in the pool stage, as well as in the quarterfinal and semifinal matches against Kazakhstan and defending champions Japan respectively, would be hoping to continue the winning momentum. 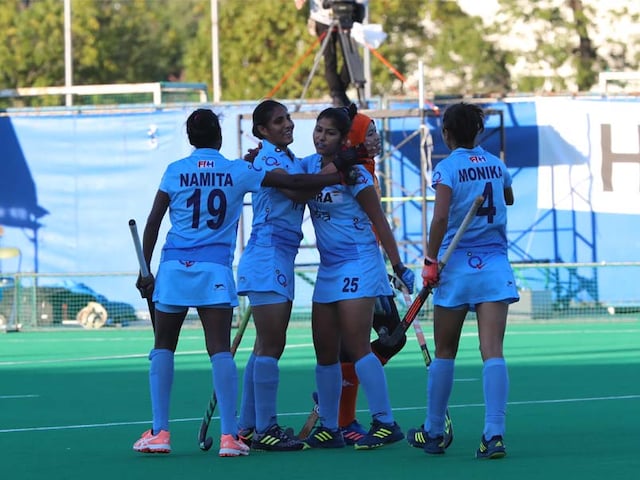 The Indian team has remained unbeaten with convincing victories in the pool stage.

Seeking a World Cup berth, the Indian women's hockey team will vie for top honours when it takes on China in the final of the Women's Asia Cup on Sunday. "We want to qualify for the World Cup next year by winning this tournament," the women's team skipper Rani said. The Indian team, which has remained unbeaten with convincing victories in the pool stage, as well as in the quarterfinal and semifinal matches against Kazakhstan and defending champions Japan respectively, would be hoping to continue the winning momentum.

"We are extremely motivated after the men won the Asia Cup. Now it's our turn to win. The mood in the dressing room is upbeat. Everyone is excited and fully prepared for the final," said Rani.

"The match against Japan was really good. Getting off to a good start was always the plan and every member of the team executed their specific role brilliantly. We played as per the strategies planned by our coaches and ensured there were minimal errors," she added.

With a 4-2 victory over hosts Japan in the semifinal yesterday, India would be high on confidence, especially having thrashed World No.8 China 4-1 in the pool stage. But the skipper insisted that her team was not going to take China lightly.

"We know China is a good team and can be quite unpredictable. We can't take them lightly simply because we have beaten them before. We have worked on our game plan for tomorrow and focus will be on following the strategy made by our coaches."

In the Asian Champions Trophy last year, India had lost to China 2-3 in the pool stage but came back strongly in the final to beat them 2-1 in a crunch game.

With 27 goals so far in the ongoing tournament, India's forwardline has been rather fierce, creating penalty corner chances and finding spaces to pump goals.

Off the total goals scored, dragflicker Gurjit Kaur has contributed with eight and is also the third highest goal scorer in the tournament so far.

Navjot Kaur and Navneet Kaur have four goals each while Deep Grace and Rani have scored thrice. Young gun Lalremsiami has also scored two goals while Neha Goyal, Sonika and Vandana Katariya have a goal each to their credit.

"I think it has been a collective team effort in the tournament so far and Gurjit has been excellent in all the matches. We want to come up with an overall performance tomorrow too," Rani said.